Successor to the BMW M4 GT4 successfully completes its first test race on the Nordschleife. 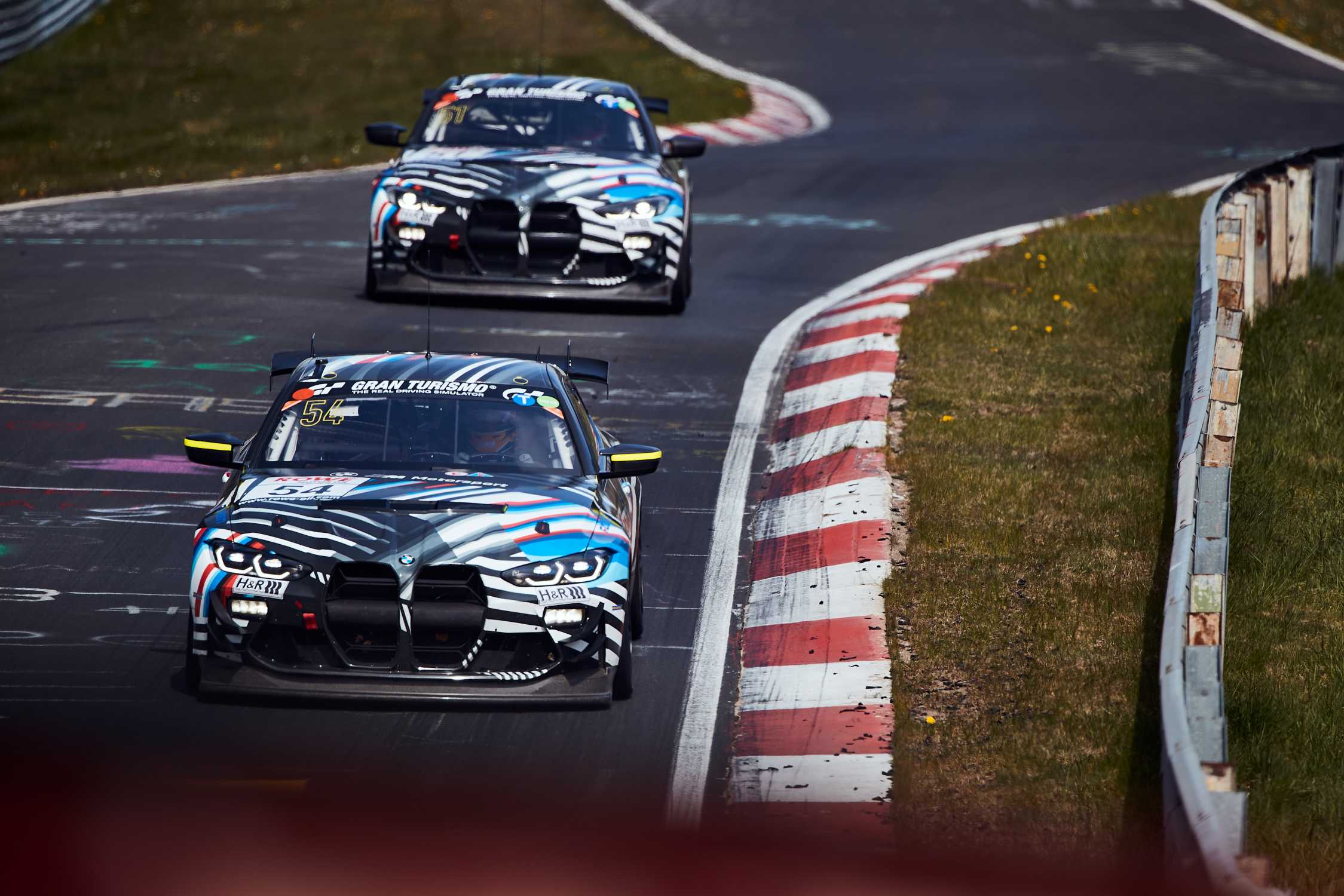 Nürburgring. As part of its intensive programme of testing
this season, the successor to the BMW M4 GT4 successfully completed
its first tough test under race conditions at the weekend. BMW M
Motorsport fielded two cars on the Nordschleife in the 4-hour race
which formed part of the Nürburgring Endurance Series (NLS).
Alternating at the wheel were BMW M Motorsport drivers Philipp Eng
(AUT), Erik Johansson (SWE) and Stef Dusseldorp (NED). They were
joined by Jörg Weidinger (GER), test and development engineer at BMW
M GmbH and himself a successful participant in the BMW M Sports
Trophy for many years.

The two race versions of the new BMW M4 production car (combined fuel
consumption: 10.1 – 9.9 l/100 km acc. WLTP; combined CO2 emissions:
230 – 226 g/km acc. WLTP) completed 50 laps on Saturday, having spent
all Friday testing on the most demanding racetrack in the world, which
is also where all BMW M production vehicles are put to the test. In
the race, the #54 car finished 24th overall and first in
the SP8T class.

“The successor to our BMW M4 GT4 hinted at its great potential in
this race,” said Andreas Roos, Head of BMW M Motorsport. “The test
went without any major problems and our engineers gathered data that
will be valuable looking ahead to further optimisations over the
course of the year. The feedback from the drivers was very positive.
That shows we are on the right track to achieve our goal of providing
our private BMW M Motorsport teams with a car in the 2023 season which
is able to back up the great success achieved by its predecessor by
retaining its strengths and improving in certain areas.”

Philipp Eng: “The race in the successor to the BMW M4 GT4 was really
great fun. We came through without any problems and even won our class
– it could not really have gone any better. The car is very easy to
drive, and you can feel that it has the DNA of the BMW M4 GT3. The
seat position is the same and the car, despite weighing more according
to the regulations, is very agile in any kind of corner. The balance
is right in fast, medium-fast and slow corners. I am happy with this
test and confident that private BMW M Motorsport teams and drivers
will also have a lot of fun with the successor to the BMW M4 GT4.”

During the development phase of the car, the focus was on issues such
as ease of maintenance and operational costs. The complete drivetrain,
including engine, 7-gear transmission and electronics, delivers more
than 500 hp and has been adopted from the production model. This
outstanding basis, which includes a multi-level traction control, has
been optimised in detail for use in motorsport. The shock absorbers
are made by KW. The use of sustainable materials like natural fibres,
which replace carbon and plastic components, plays an important role.
BMW M Motorsport is collaborating with the company Bcomp in this area.

Further details of the car that has been developed under SRO GT4
regulations will be released over the coming months.