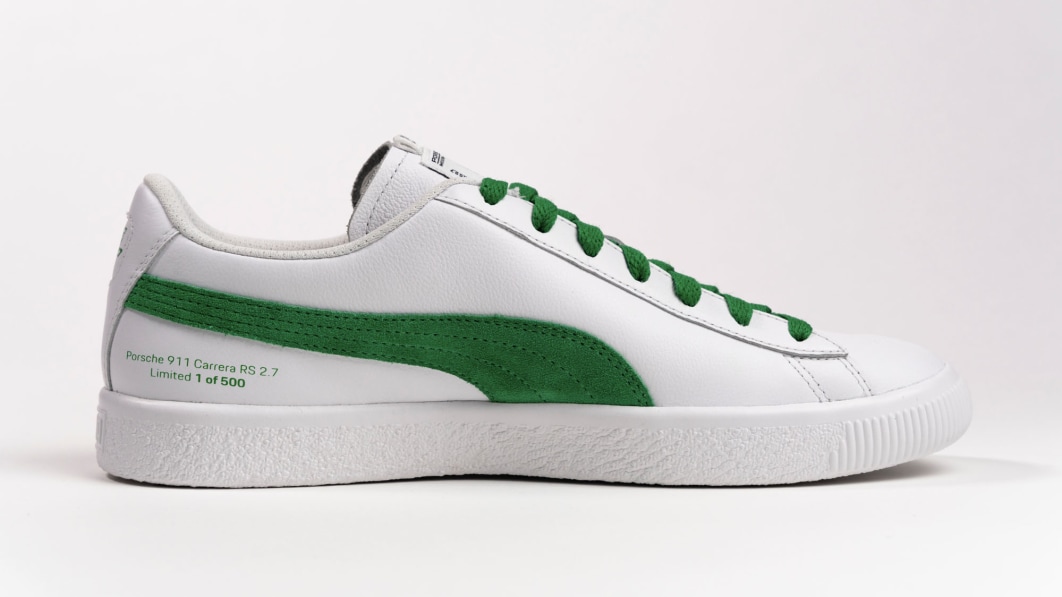 Shoe brand Puma is helping Porsche celebrate 50 years of the emblematic 911 Carrera RS 2.7 by releasing a limited-edition version of its Suede model. It’s available in 10 color combinations designed as a tribute to the liveries that Porsche offered on the Carrera RS 2.7.

While the Suede’s design is unchanged, Puma added Porsche lettering on the left side of the shoe, “Porsche 911 Carrera RS 2.7 Limited 1 of 500″ on the right side, the “RS 2.7” logo on the back, and a label on the tongue that gives buyers one free entry into the Porsche museum. Like on the RS 2.7, each color combination is characterized by one main color and contrasting accents. For example, the special Suede is available in white with green laces, lettering and stripes on both sides ⁠— green and white was a popular color combination on the RS.

Black with red accents, blue with black accents, and green with black accents are among the other color combinations available, and production is limited to 500 pairs of each style. Orange and black and Grand Prix White and black are exclusively offered in Holland and in Japan, respectively. However, even the colors available globally will be more difficult (and likely more expensive) to buy than you might think.

Like the 911 Carrera RS 2.7, the Suede proved far more popular than expected. Porsche’s marketing department notably feared the racing-derived coupe built for homologation reasons would be difficult to sell, yet demand was so high that 1,580 units were ultimately built. The original plan was to cap production at 500 cars. Puma released the Suede as a limited edition of 307 pairs, a figure chosen because it was the competition number that track and field Olympian Tonnie Smith used, and the shoe remains a core part of its brand over 50 years later.

This isn’t the first time that Porsche and Puma have collaborated. In 2020, the partnership spawned a series of 911 Turbo-inspired shoes.