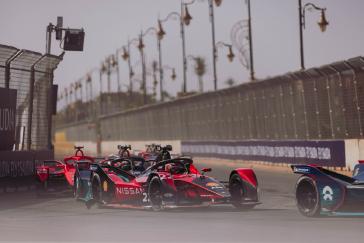 MARRAKESH, Morocco – Nissan e.dams fought hard in a highly competitive Marrakesh E-Prix, doing everything they could to find strong pace throughout the event, and coming close to making it to the qualifying duels.

With Formula E using an altered timetable to avoid running in the midday heat, Sébastien Buemi and Maximilian Günther hit the track on Friday night, getting their first taste of the Circuit International Automobile Moulay El Hassan in over two years.

Buemi set the sixth-fastest time in FP2 on Saturday morning, before both drivers headed out in Group A for qualifying. In an extremely tight session, where just over half a second split first and last, the pair narrowly missed out on making it through to the Duels.

Buemi started one spot ahead of Günther on the ninth row of the grid, with the German making progress in the opening laps. Buemi’s efforts saw him move up to 14th, before the Swiss driver dropped back to finish 16th. Günther was making further inroads, passing rivals but contact with another driver while going for an overtake damaged his car, eventually forcing him to retire from the race.

“Overall, our pace here wasn’t the best we’ve seen this season, but we expected this,” said Tommaso Volpe, general manager, Nissan Formula E, and managing director, Nissan e.dams Formula E Team. “Qualifying was really tight – we just missed out on the Duels but then SÃ©b also had a three-place penalty. Starting so far back is never easy, but both drivers were happy with the balance of the car and we managed to keep the battery temperature down, which was difficult in these conditions. We knew it would be tough due to the nature of the track and the characteristics of our car. Unfortunately there were no Full Course Yellow periods or Safety Cars for us to try and take advantage of, limiting our potential.”

Nissan e.dams return to action in two weeks’ time as Formula E travels to New York for a double-header on July 16-17.

Sébastien Buemi
“We knew this would be a difficult circuit for us, but I’m happy with my performance. Qualifying was really close between all the teams, we were only a tenth away from making it through to the Duels, which would’ve been amazing. Obviously it wasn’t the end result we were looking for, but we learned a lot about our car and will take that forwards to New York. We were strong there last season so we’ll look to repeat that later this month.”

Maximilian Günther
“There was a lot of action at the start of the race. I gained one position and we managed to go pretty well from there, making some overtakes and using the Attack Modes early. We had a good race, but then my car got damaged in an incident and the front wing eventually fell off completely. It was unfortunate, but there are positives, as the pace was strong on a track that’s not really our best one. Not our day, things didn’t come together but we will keep going and get another chance in New York.”