Marco Wittmann on the podium in the Imola heat – Sheldon van der Linde defends his lead in the overall standings. 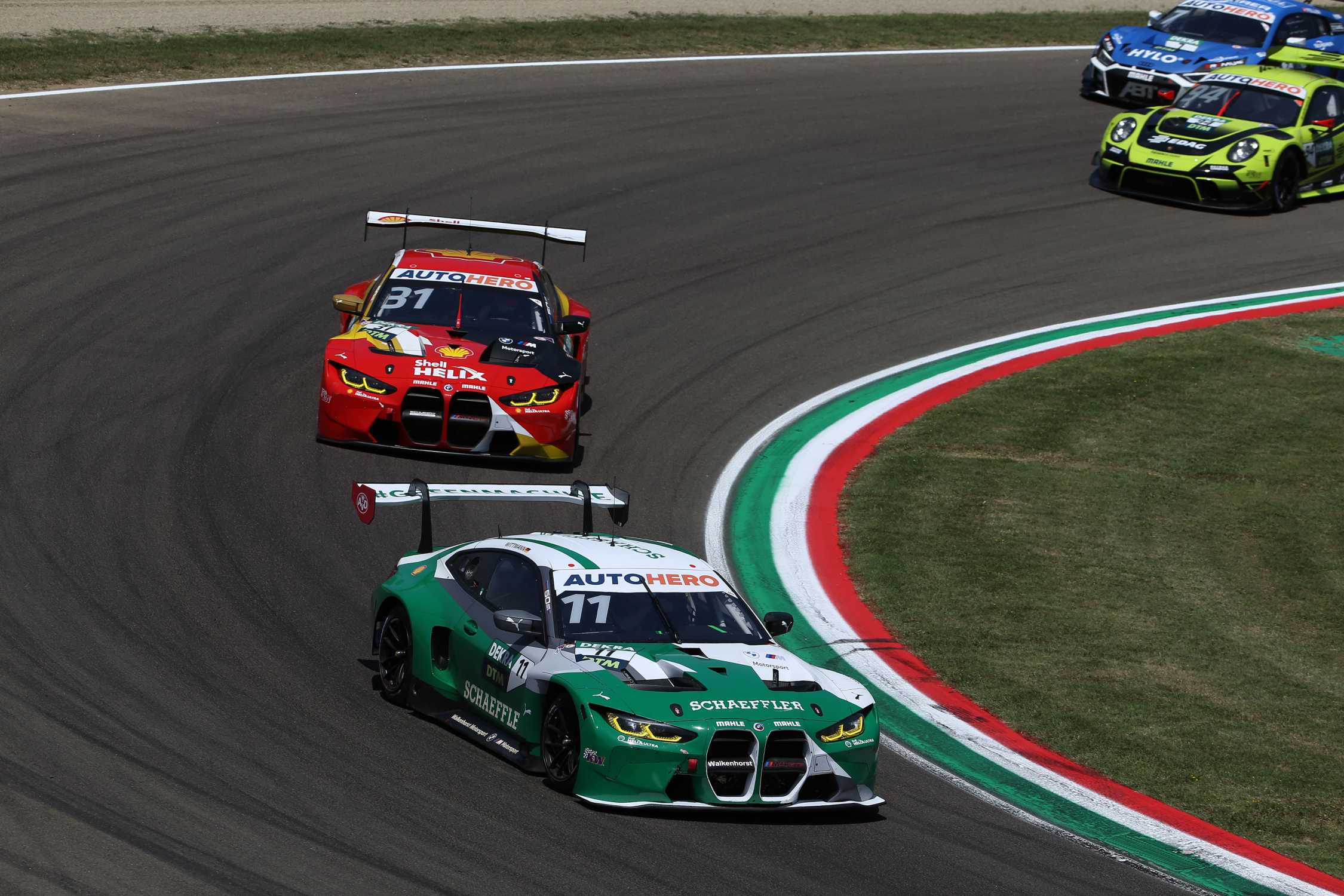 Imola
. The DTM’s debut at the iconic Imola (ITA) circuit on the
third race weekend of the season was a success for the BMW M
Motorsport teams. Marco Wittmann (GER) finished third on Sunday to
claim the first podium in the DTM with the new BMW M4 GT3 for him
and the Walkenhorst Motorsport team. Sheldon van der Linde (RSA)
picked up points in both races and defended his championship lead in
the process. Schubert Motorsport continues to lead the Team
competition. BMW M works driver Timo Glock (GER) and Ceccato Racing,
led by team principal Roberto Ravaglia (ITA), enjoyed a successful
guest start.

Marco Wittmann put on a great show on Sunday as he pulled off a
spectacular last-lap manoeuvre to overtake Lucas Auer (AUT, Mercedes)
and clinch a spot on the podium. He had previously secured his best
qualifying result of the DTM season, landing his BMW M4 GT3 on third
place on the grid. Wittmann was also the best-placed BMW M Motorsport
driver on Saturday, when he finished seventh.

Sheldon van der Linde went into Saturday’s race with an extra 25
kilograms of success ballast following his two victories at the
Lausitzring (GER), however, he did a good job of damage limitation in
eighth place. Starting Sunday’s race from eleventh on the grid, he
drove a strong race and fought his way into fifth place. His haul of
14 points this weekend was sufficient to maintain his lead in the
Drivers’ Championship. Now with 80 points to his name, he leads the
second-placed driver by 12 points. In the Team competition, Schubert
Motorsport leads with 101 points. Philipp Eng (AUT) had a very strong
drive on Sunday to finish sixth and add eight points to the cause at
Imola. The Austrian impressed with multiple overtaking manoeuvres. Eng
had narrowly missed out on the points in twelfth place on Saturday.
Esteban Muth (BEL) finished 14th on Sunday in the second
Walkenhorst Motorsport BMW M4 GT3, having failed to finish on Saturday.

BMW M works driver Timo Glock was the centre of much attention in
Italy and, after an impressive race on Sunday, enjoyed a successful
guest appearance with the Ceccato Racing team, for whom he competes in
the 2022 Italian GT Championship. Glock started race two from
18th on the grid, but battled his way into eleventh.
Despite narrowly missing out on a top-ten result, that was still a
great success given the very short amount of preparation time and the
high-class opposition. On Saturday, he was forced out of the race
following a collision on the opening lap.

Quotes from the DTM weekend in Imola.

Marco Wittmann (#11 BMW M4 GT3, Walkenhorst
Motorsport): “What a weekend! After the two disappointing
events at the start of the season, we have taken a big step forward as
a team. For this reason, the results here at Imola are really
satisfying. It was very special to clinch the first podium of the
season with a manoeuvre like that on the final lap on Sunday. You
don’t pull off something like that every day. I am very pleased with
the push that this weekend will give us. Just in time for my home
event at the Norisring in two weeks.”

Sheldon van der Linde (#31 BMW M4 GT3, Schubert
Motorsport): “The weekend went better than we had expected,
particularly on Saturday when I did not expect to finish in the points
given the success ballast. I was positively surprised with eighth
place. Fifth place on Sunday was even better, although I did have an
issue shortly after the start and thought for a moment that my race
was over. After that, I had a few good overtaking manoeuvres and
battles with my fellow BMW M Motorsport drivers. I defended my lead in
the Drivers’ Championship, that is the main thing.”

Philipp Eng (#25 BMW M4 GT3, Schubert Motorsport):
“On the whole it was a good weekend for us. Unfortunately, we made a
mess of qualifying on Saturday. The race was much better,but I found
myself stuck in the group behind Sheldon van der Linde. Qualifying was
better on Sunday, although still not perfect. My pace was fantastic in
the race, and I think I could even have pushed for the podium.
Unfortunately, that was not quite to be in the end.”

Esteban Muth (#10 BMW M4 GT3, Walkenhorst
Motorsport): “Unfortunately, that was another tough weekend
for us. We are simply not managing to get the full potential out of
the tyres in qualifying. That means I am having to start from well
back and am then getting stuck in the pack. The race speed was very
good, particularly today. The BMW M4 GT3 is very strong on the
straights, however that does not help if I cannot start from further
up the field. That is primarily what we must work on.”

Timo Glock (#50 BMW M4 GT3, Ceccato Racing): “I had
an awful lot of fun this weekend and really enjoyed my mini comeback
in the DTM. Our lack of experience was particularly apparent in the
qualifying sessions in which we simply could not get the best out of
the tyres, which were new to us. We would need more test time for
that. My race was over quickly on Saturday. On Sunday, I had
impressive pace and a good start. Unfortunately, it went a bit wrong
during the pit stop, which cost me a lot of positions and ultimately a
top-ten finish. That is a bit frustrating. However, for Ceccato Racing
it was important to experience the standard in the DTM. A big thank
you goes to the team, BMW M Motorsport, and the ITR and its boss
Gerhard Berger for the fantastic support with this guest start. I
would love to do it again.”