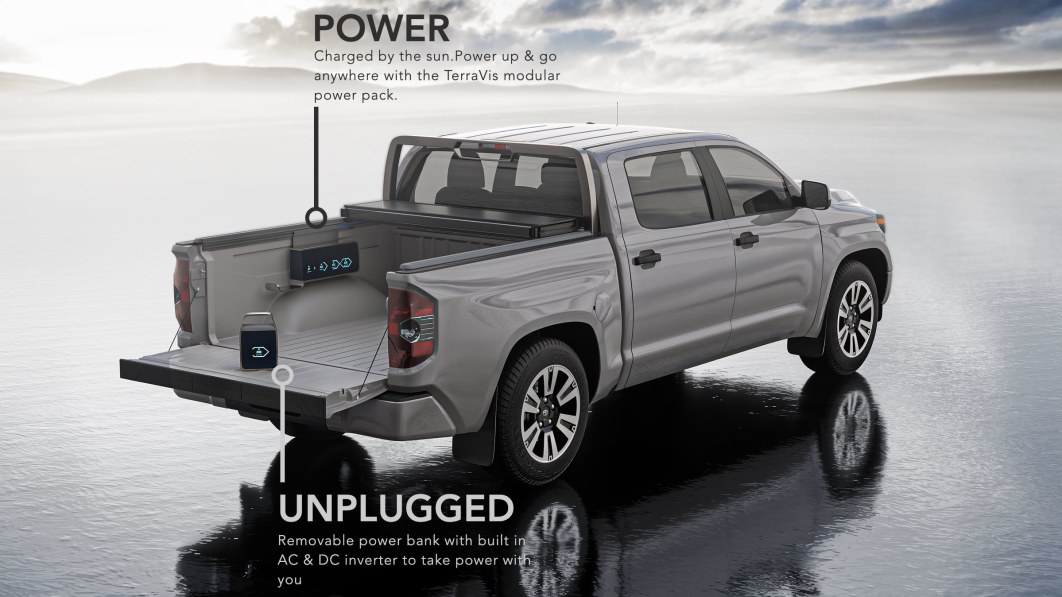 Canadian company Worksport has been making tonneau covers for pickup trucks since 2011. It announced a solar tonneau cover last year that it says can produce more than 1,000 watts of power depending on the size of the pickup bed. Seems the Hyundai America Technical Center (HATCI), which is the design, technology, and engineering arm for all group vehicles sold in North America, has taken note. HATCI entered into a formal agreement with and provided CAD data to Worksport to create prototypes of what’s called the Solis solar tonneau, and an energy storage unit called COR, for the Santa Cruz pickup. Here’s the fascinating part: It’s also being considered “for Hyundai’s yet to be announced vehicle.”

It appears the Solis is what Worksport’s customer-facing side calls the TerraVis, which is the solar cover announced last year, pictured above on a Toyota pickup. The site for that product says modular monocrystalline solar panels with around 22% efficiency are mounted in the tonneau’s power rail. That modularity means depleted cells can be swapped for fresh units. The captured energy is fed into a modular power bank of individual 2-kW power units attached to the inner wall of the bed. The last unit is a portable battery bank that can hold 1.5 kilowatts, fitted with a 1,500-watt AC inverter and four 1,500-watt outlets.

Considering the size of the Santa Cruz, Worksport says the prototype tonneau cover will be able to generate 650 watts of power depending on conditions. Worksport has until October of this year to present its prototype to the Hyundai head office, and both parties “intend to explore the benefit of each other’s products working in tandem, in order to determine the viability of a future partnership.”

Solar panels and bed-mounted power banks in the automotive space usually arise in discussions of electric pickup trucks and work trucks, neither of which describes the Santa Cruz. Naturally, we’re interested in Hyundai’s plans for its little lifestyle hauler, and especially interested in the “yet to be announced” Hyundai.

As for the public, the TerraVis site informs potential retail customers that it is “currently in the design and pre-production stages of the TerraVis and the TerraVis Cor,” and is working on setting up a facility to produce the solar cover and energy storage system.