The 23YM CRF450R marks 50 years since the arrival of Honda’s first motocrosser intended for all riders, not only racing teams. The five decades since have been marked by a number of technological leaps that have made the letters ‘CR’ and then ‘CRF’ synonymous with off-road performance. Here is a look back at just some of those major landmarks. 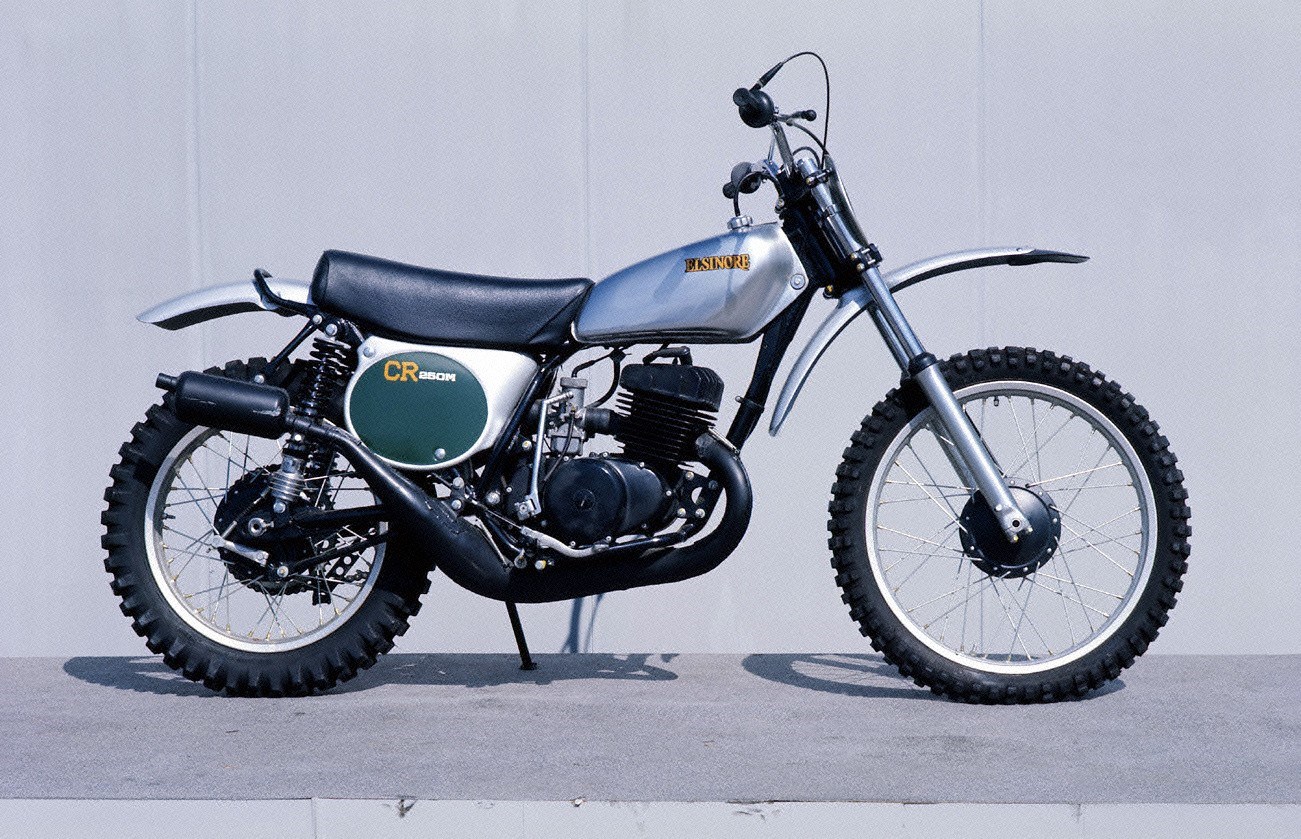 Win on Sunday, sell on Monday

The CR250M Elsinore was a product of growing motocross competition (and sales demand) in the USA and Europe. It was Honda’s first built-from-scratch, two-stroke production MX machine and met with instant success, thanks to its user-friendliness, high build quality and reliability. Promotional activities for the new bike included a much-loved advertising film featuring Steve McQueen. 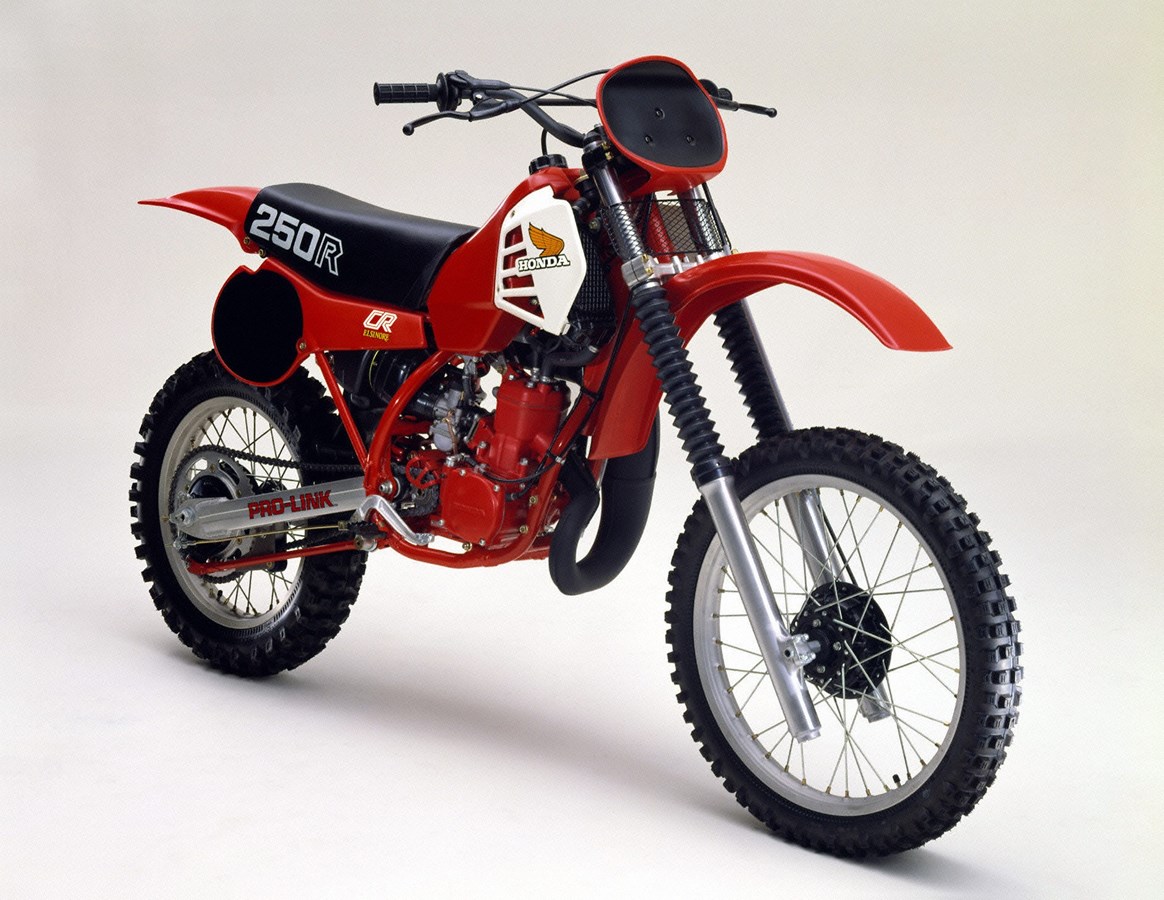 A big year for development. The CR250M had an earned its racing ‘R’ in the late ‘70s, and in 1981 Honda unleashed their factory-bike technology to the buying public with the first production, liquid-cooled machine. The engine was a long-stroke design cooled by two small radiators. Perhaps more telling is the chassis; the aluminium swingarm and single, remote-reservoir Pro-Link rear shock pointed to the future, complementing the known quantities of steel frame and double-leading shoe drum brake. 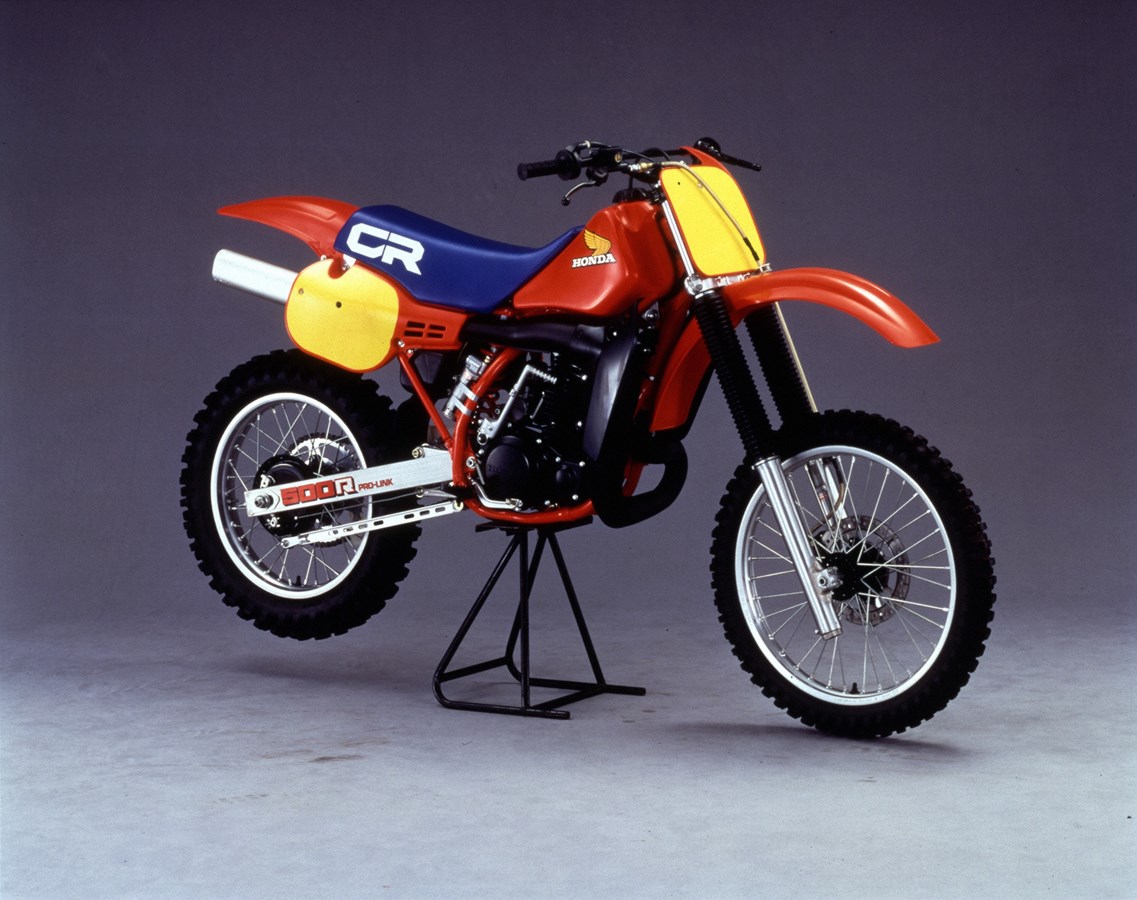 Originally launched in 1984 in an air-cooled form (with over 70Nm torque on tap) the CR500R was water-cooled in 1985. Now very much a bike of myth and legend, it perhaps defined the motocross heydays of the 1980s with an aesthetic that has inspired the 2023 CRF450R 50th Anniversary model. It tested the limits of chassis technology – and most riders’ ability – to the very limit. 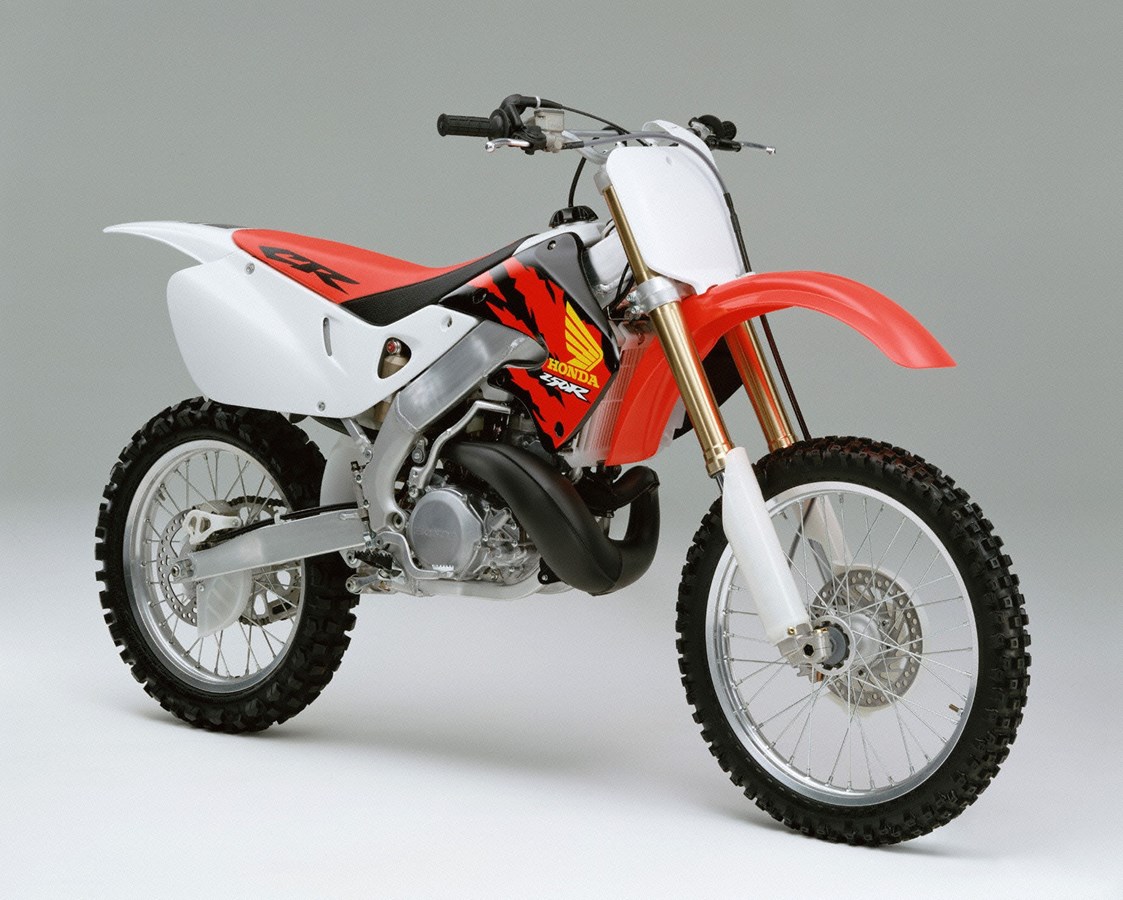 To make use of the advancements in engine technology and consequent increases in power and torque, Honda took the bold step of producing the first aluminium frame for a production MX bike. Tubular steel’s rigidity was replaced by twin-spar flexibility and other parts combined for a more high tech feel, like fully adjustable Showa suspension and disc brakes front and rear. Recognised as one of the most influential machines of the ‘90s, the CR250R started an off-road revolution that can still be seen in the MX bikes of today. 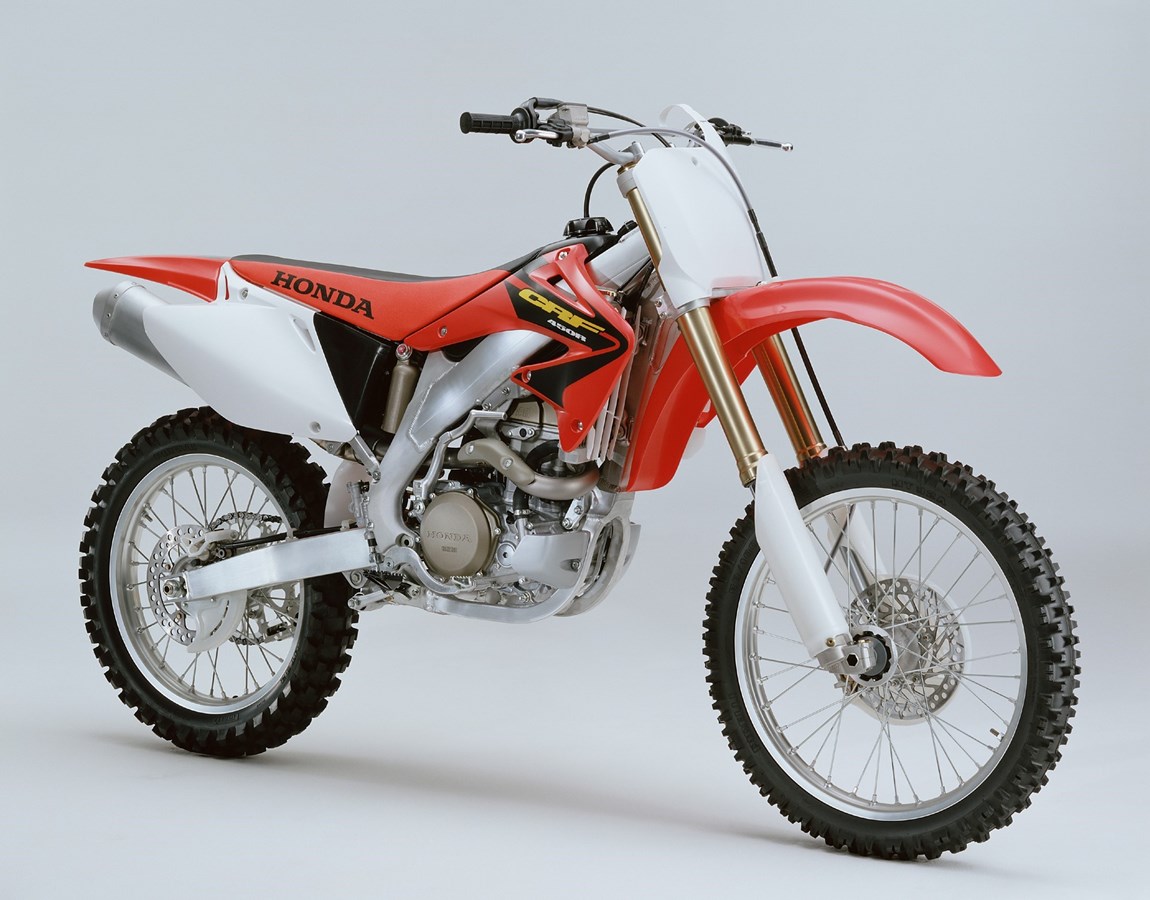 Open-class power in a 250-sized package

Honda kicked off a new MX mission with its first generation of 450, the first four-stroke and a direct replacement for the CR250R. And with its 250-based chassis, it was slim and lightweight. The 449cc engine was powerful, smooth and with a wide powerband which made it no less potent, but much less intimidating, than a comparable 250cc two-stroke engine. The CRF450R made going faster, easier. 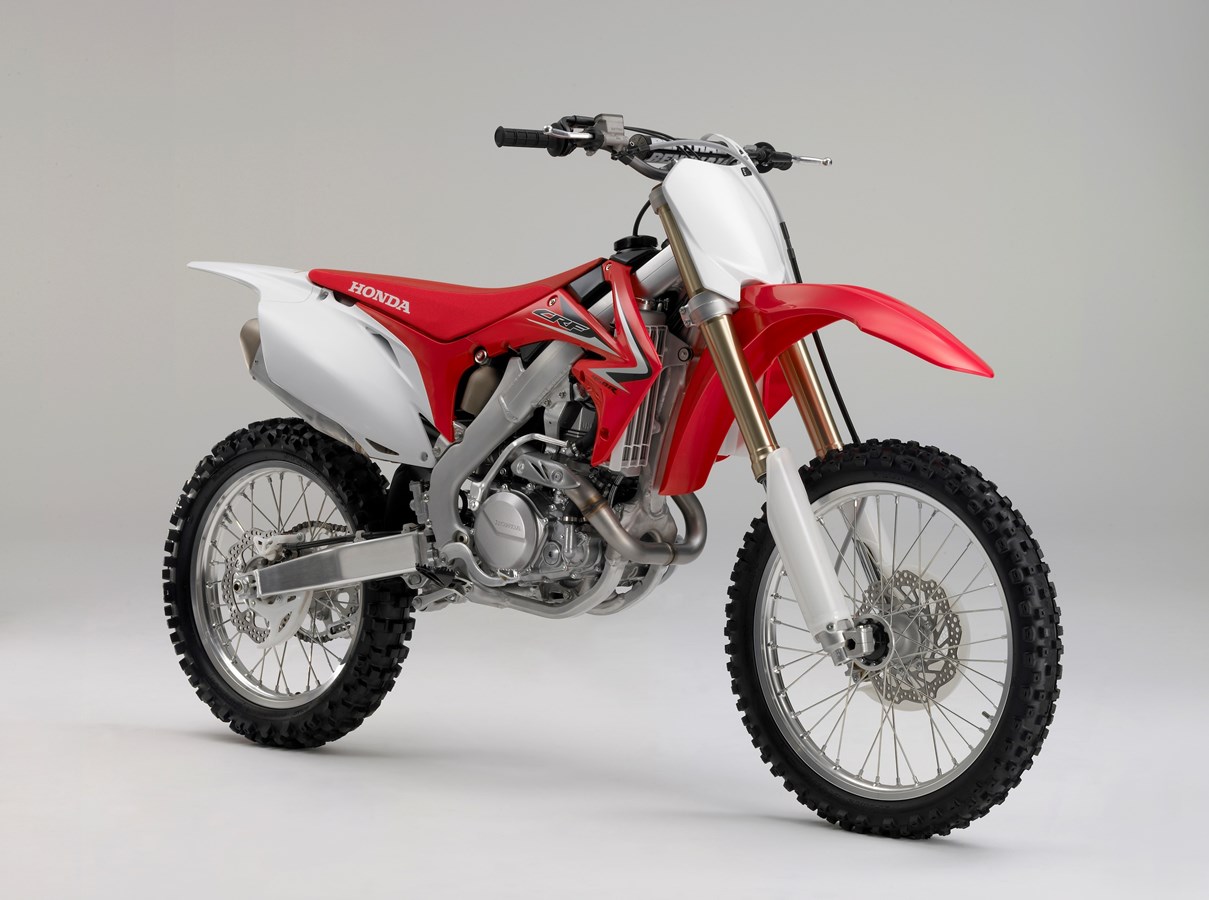 An injection of technology

After steady evolution the CRF450R was reborn with a fuel-injected engine with a 50mm throttle body and 12-hole injector. Owners were also able to make adjustments to fuel delivery and ignition timing via an HRC PGM-FI setting tool. The engine redesign and new chassis were built together with a focus on mass centralisation, making for a compact machine carrying its weight more forward and lower. Suspension was by Kayaba: 48mm Air-Oil-Separated (AOS) USD forks and compact rear shock. 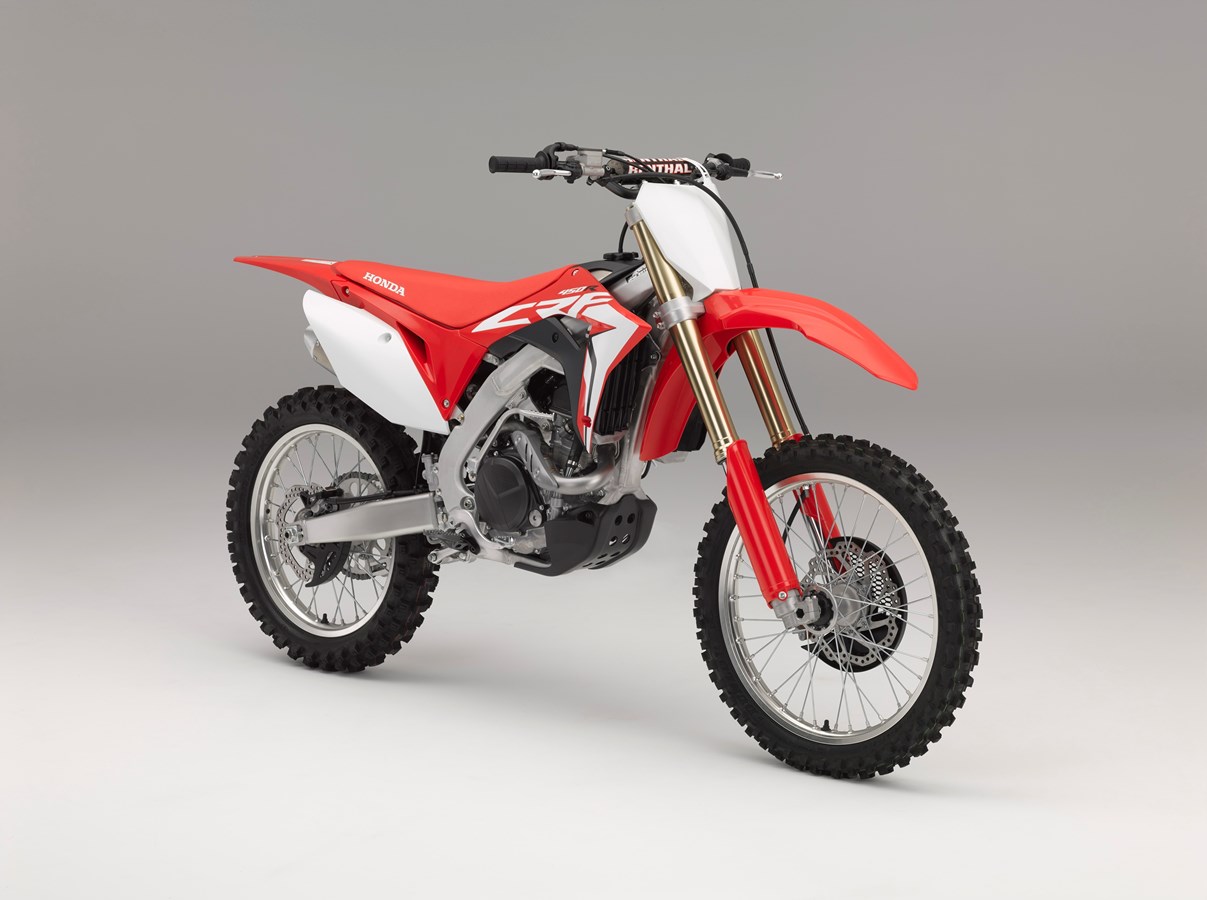 All-new and made for the holeshot

In 2021, aside from the wheels and fundamental engine architecture, the CRF450R was effectively a totally new bike, drawing heavily on developments from the 2019 MX GP championship-winning CRF450RW of Tim Gajser. He and HRC secured the title for a second year in 2020 and finished a close third in 2021.

As ever with motocross, and the CRF450R, the game moves on and the latest machine is armed with a host of factory rider led and HRC updates to engine and chassis aimed at making going fast – really fast – that much easier. And 2023 marks 50 years since the bike that started it all, the CR250M Elsinore. The CRF450R 50th Anniversary limited edition pays stunning homage to the mighty CRs of the 1980s and, true to Honda’s roots in the sport – and to the blueprint laid down all those years ago – remains an HRC-bred racer that it is possible to buy.