Holger Rune wins the BMW Open by American Express and a fully-electric BMW i4 M50. 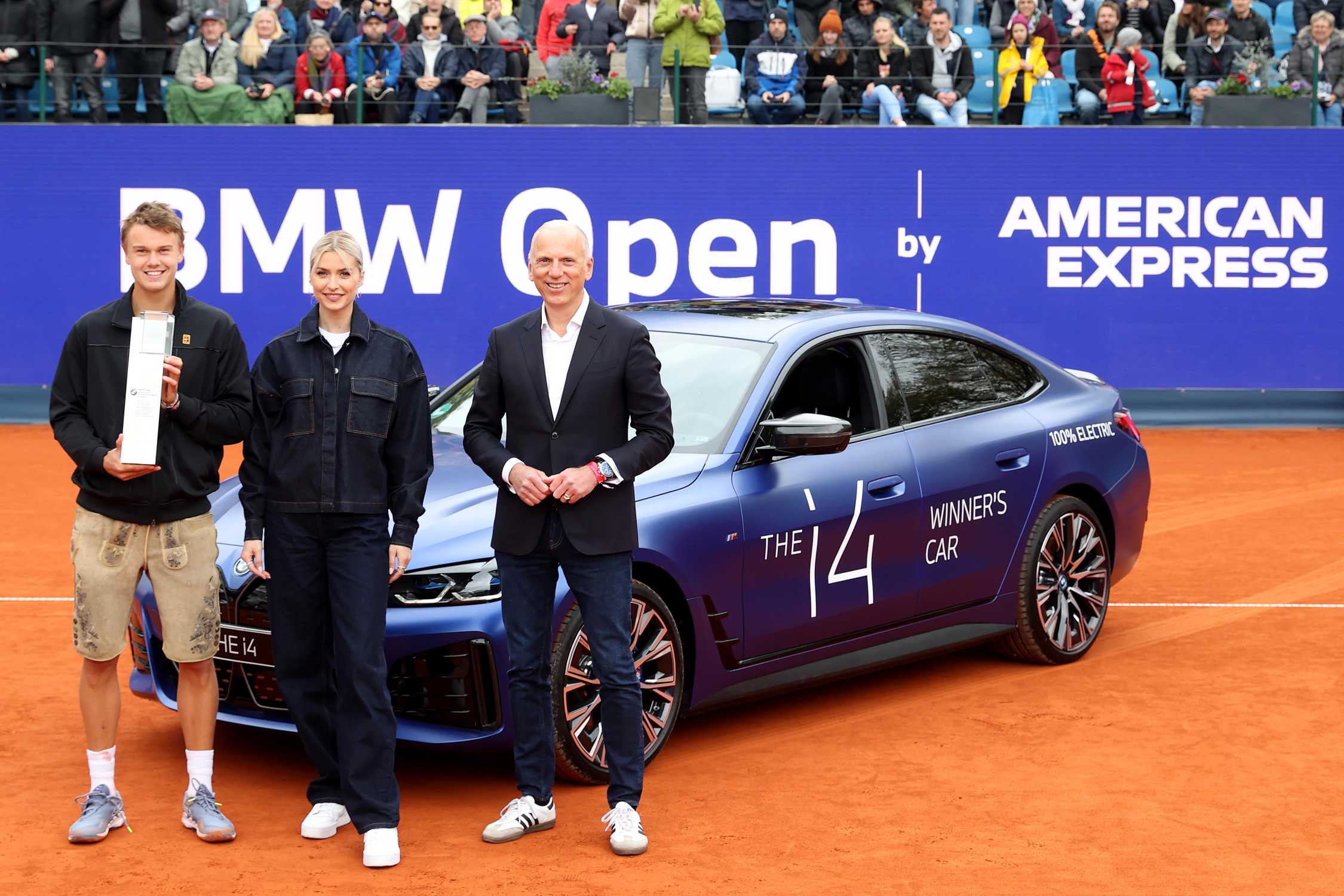 Munich. The winner of the 2022 BMW Open by American
Express is Holger Rune. Having dispatched top seed Alexander Zverev
(GER) in the second round, the Dane triumphed at MTTC Iphitos to claim
his first ATP title and pick up a cheque for € 81,310. The 19-year-old
was also received the champion’s Lederhose, traditionally presented at
the ATP World Tour event in Munich, as well as the fully-electric
Winner’s Car – the BMW i4 M50 in Frozen Portimao Blue metallic
(combined power consumption: 22.5 – 18.0 kWh/100 km, acc. WLTP;
combined CO2 emissions: 0 g/km). The Gran Coupé is the
first fully-electric BMW consistently aimed at providing great driving
dynamics. The car was manufactured at BMW Group Plant Munich, which
celebrates its 100th anniversary this year. Like all the
other plants in the global BMW Group production network, it is setting
new benchmarks and defining the automobile production of the future.

“On behalf of the BMW Group, I would like to congratulate Holger Rune
on his fantastic performance at the 2022 BMW Open by American Express
and hope he enjoys a lot of driving pleasure with the BMW i4 M50. The
BMW i4 proves emphatically how well fully-electric mobility and
sporty, dynamic driving go together – and that makes it the perfect
car for a champion,” said Pieter Nota, member of the Board of
Management responsible for Customer, Brands and Sales, at the
presentation ceremony. “A big thank you goes to the organisers MMP
Event, MTTC Iphitos, all the partners and volunteers, and the more
than 40,000 tennis fans, who all contributed to making this an
extremely successful and atmospheric tournament week.”

In the final, Rune’s opponent Botic van de Zandschulp from the
Netherlands was forced to retire due to acute illness with the score
at 4:3.

“Even though I certainly didn’t want to win in this manner, I am
absolutely delighted with my first ATP title. The week was superb, I
really love Munich and the fans. The atmosphere was fantastic“, said
Rune, after receiving the trophy from Minister President of Bavaria,
Markus Söder. BMW Brand Ambassador Lena Gercke had driven the BMW i4
M50 onto centre court and then took the beaming winner for a lap of
the red clay. The Dane does not yet have a driving license but now has
a fine incentive to take his test. “I am going to get my driving
license as soon as possible, so that I can drive this brilliant BMW
i4“, said Rune, who has moved up to 44th in the world rankings and
announced that he plans to return to Munich to defend his title next year.

The doubles at the 2022 BMW Open by American Express was won by Kevin
Krawietz und Andreas Mies from Germany, who triumphed 4:6, 6:4, 10:7
against Brazilian Rafael Matos and David Vega Hernandez from Spain.

The figures for fuel consumption, CO2 emissions, power consumption
and range are measured using the methods required according to
Regulation (EC) 2007/715 as amended. These figures refer to vehicles
on the automotive market in Germany. For span widths, the
specifications take into account the effects of any optional equipment.

All values were calculated based on the new WLTP test cycle. WLTP
values are taken as the basis for determining vehicle-related taxes or
other duties based (at least inter alia) on CO2 emissions as well as
eligibility for any applicable vehicle-specific subsidies. Further
information on the WLTP and NEDC measurement procedures can also be
found at www.bmw.de/wltp.

More information about the official fuel consumption figures and the
official specific CO2 emissions of new passenger cars can be obtained
from the “Guideline on fuel consumption, CO2 emissions and power
consumption of new passenger cars”, available free of charge from
all outlets, from Deutschen Automobil Treuhand GmbH (DAT),
Hellmuth-Hirth-Str. 1, 73760 Ostfildern-Scharnhausen, and at https://www.dat.de/co2/.