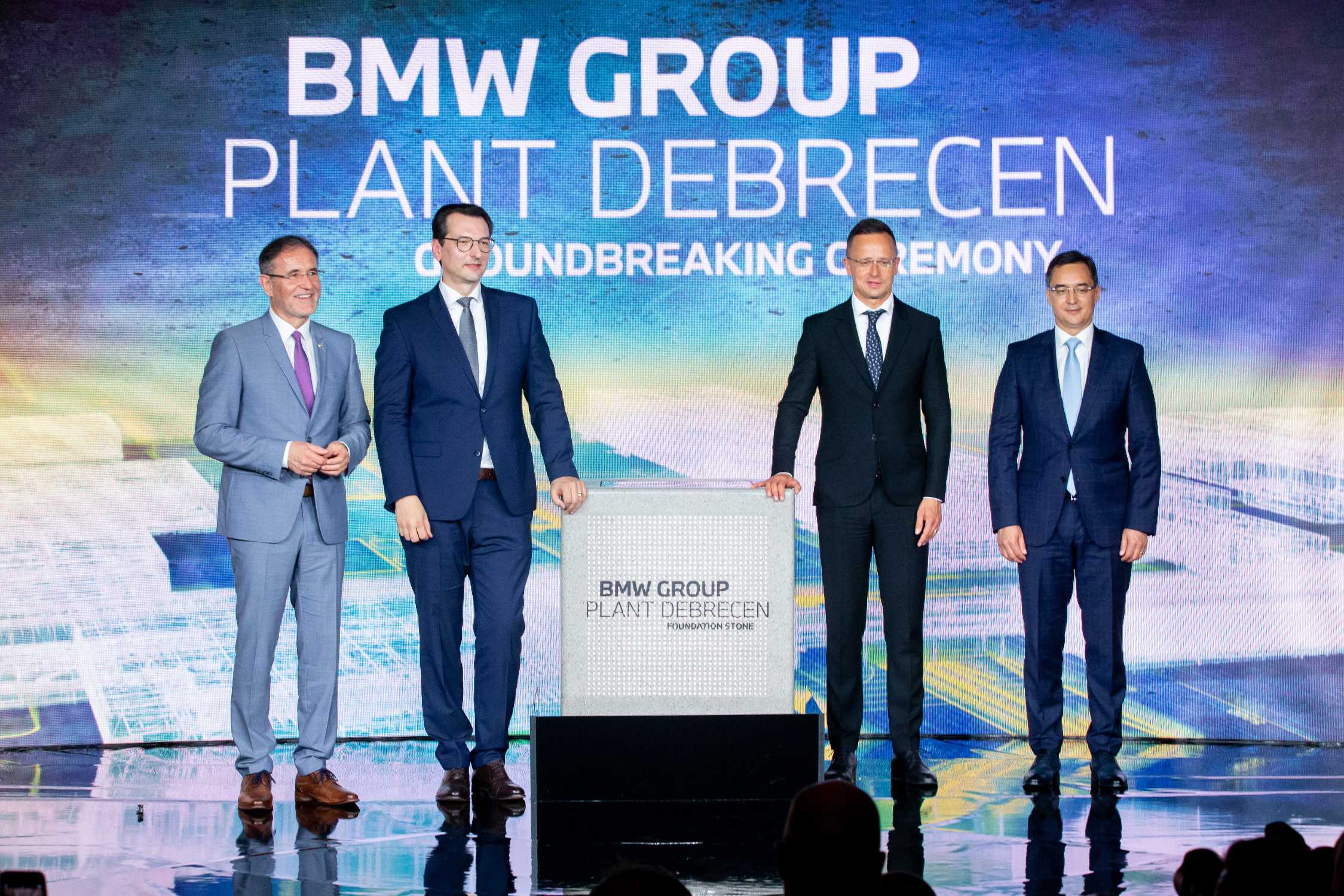 Munich/Debrecen. The foundation stone has been laid
for the BMW Group’s new plant in Debrecen, Hungary. The new facility
comes after an investment of more than €1 billion and will launch
series production of the fully electric Neue Klasse in 2025. “Plant
Debrecen will set new standards in highly innovative vehicle
manufacturing,” said BMW AG Board Member for Production Milan
Nedeljković at the foundation stone-laying ceremony. “This plant is
state-of-the-art in terms of flexibility, sustainability and
digitalisation in the entire automotive industry.”

The BMW Group consistently pursues a strategy of profitable growth.
“The new plant in Hungary will play a key role in the transformation
to electric mobility for both the BMW Group and its production
network,” said Nedeljković at the ceremony. “It’s another important
building block in our capacity and will support our long-term volume
growth.” By building up further capacities in Europe, the company is
strengthening the balance of production volumes
between the
American, Chinese and European markets.

“Through the hard work of recent years, we have succeeded in creating
the most competitive investment environment in Europe in Hungary,
based on political stability, an excellent Hungarian workforce and the
lowest taxes on labor in Europe,” said Foreign Affairs and Trade
Minister Péter Szijjártó in his speech: “The success of Hungary’s
economic policy is clearly shown by BMW’s investment of around one
billion euros, which will create Hungary’s leading position in the new
electric age of the automotive industry and help the economy grow in
the long run.”

“As BMW ‘s new plant in Debrecen reinterprets car manufacturing, we
will redefine Debrecen and the eastern region of Hungary with the
arrival of BMW. Following the 2018 announcement, the city is
characterized by unprecedented dynamism and development. It became
tangible for everyone in Debrecen how important it was for the
company’s leaders to choose Debrecen,” said Dr László Papp, the Mayor
of Debrecen at the groundbreaking ceremony. “The plant under
construction here marks the beginning of a new era, both for BMW’s
global network and for the entire automotive industry. New production
processes, new technology, and a revolutionary new vehicle. All this
increases the value of the Debrecen plant and with it Debrecen,” said Papp.

The BMW Group is establishing a full vehicle plant in Debrecen, with
a press shop, bodyshop, paintshop and assembly. Built on a plot of
more than 400 hectares to the northwest of the Hungarian city, it will
have a capacity of about 150,000 units a year. It comes at an
investment of more than €1 billion and will launch production purely
of electric vehicles in 2025. Debrecen will manufacture the founding
member of the Neue Klasse, which will be based on the cluster
architecture developed specially for fully electric vehicles.

“The Neue Klasse is a unique opportunity for us to completely rethink
automotive production in every respect,” said Milan Nedeljković. “In
BMW Production, our strategic vision is the BMW iFACTORY with its
three dimensions: LEAN. GREEN. and DIGITAL., and we are going to
implement it perfectly in our new plant.”

Clear target: No CO2 emissions in production in Debrecen

The BMW Group has set clear sustainability and production targets for
its new facility. Nedeljković: “CO2 emissions per vehicle
manufactured will be zero – proving that with sufficient determination
and innovativeness, automotive production can indeed be sustainable.”
A key element in the sustainability concept for the new plant is the
complete absence of fossil fuels. “We will not use oil or natural gas
and will source any electricity that’s needed purely from renewables,”
said Nedeljković. He emphasised: “Our plant in Debrecen is the first
in the world to deliver CO2-free vehicle production.” As a
result, Debrecen will make a noticeable contribution towards achieving
the 80-percent reduction in CO2 emissions from production
that we are targeting for 2030.”

Much of the energy needed will be generated by extensive photovoltaic
systems directly on the plant premises. The rest will be sourced
regionally from 100-percent renewables. Investigations are also
underway into the use of geothermal energy. In addition, Plant
Debrecen will utilise innovative technologies that do not yet exist in
this form in the market, especially in the paint shop. Here, paint
will no longer be dried by means of gas furnaces. Instead, new,
electrically powered technologies will be integrated into the future
production system. “We are clearly a pioneer in this respect,” added Nedeljković.

Another key element in sustainable production is consistent
circularity. Wherever possible, production materials and resources
will be reused. Metal offcuts and filings from milling and pressing,
for example, will be recycled for further use. Waste heat from cooling
systems will be fed into a closed loop to heat indoor spaces and
water. And smart energy monitoring systems will track exactly how all
the energy is used, detect any waste and ensure production is as
resource-efficient as possible.

Furthermore, the BMW Group is adopting new approaches to
digitalisation in Debrecen – including right now, as the plant is
constructed. Digital planning tools are being used to an unprecedented
extent, to design every last detail of the entire production process
virtually. Each individual stage of manufacturing is simulated and
optimised with absolute precision. In particular, the collaboration
with the US company NVIDIA and the use of the jointly developed
Omniverse planning software is making planning not only more accurate
and faster but also far more collaborative, both in-house and with
partners and suppliers. Milan Nedeljković: “This fascinating
technology is revolutionary. Our future plant in Debrecen is already
manufacturing Neue Klasse vehicles today – virtually.”

Plant Debrecen will use numerous digitalisation tools as well.
Artificial intelligence (AI) applications will support quality
assurance in a range of ways and optimise processes in smart and
predictive maintenance. The spectrum of digital applications will also
include edge computing, data analytics, 5G location technologies and
autonomous smart logistics systems with AI functions. “Digitalisation
offers huge potential, and we are going to exploit it fully and
intelligently in Debrecen,” the Board Member for Production
emphasised. “We are going to achieve new dimensions of data
consistency along the entire value chain and across all process chains.”

Recruiting is picking up speed

“But despite all the technologies, innovations and high tech, a car
plant is only ever as good as the people who work there,” Nedeljković
added. Over the next two years, Hans-Peter Kemser’s team of currently
100 people will grow to over 1,000. “Recruiting is gradually picking
up speed already,” Kemser reported. The aim is to fill management
positions in all technologies with Hungarian specialists. We will
focus very clearly on recruiting talented specialists from the
Debrecen area and eastern Hungary,” he continued. As well as
attractive salary opportunities, the company will offer many
additional benefits that will make it a highly attractive employer in
Hungary, as elsewhere. Benefits will include specific accident
insurances, mobility allowances, high-quality catering and, from 1
June this year, access to the company health service. There are also
plans to offer childcare and education for children of German and
Hungarian families. “We see ourselves as an attractive employer in
various respects,” Kemser explained. “To us, a working environment in
which employees are appreciated is just as important as fair working
conditions and employee-centric workplaces. Because it helps employees
identify with the company and stay loyal to us.”

As the next phase of construction begins, the company is offering
jobs for specialists and people who are skilled in the construction of
buildings and systems as well as facility management. Further
employees are being recruited for HR, Finance, Purchasing, IT,
Planning and Controlling. Positions in production will be advertised
at a later stage.

Construction of the BMW Training Centre at Plant Debrecen is already
underway, in preparation for September 2023, when local vocational
training will be launched as part of a dual course of study.
Three-year training programmes in four professions will be delivered
by eight training instructors to prepare 70 apprentices a year for
proficiency examinations. “We are shaping not only the future of our
plant but also the personal futures of a great many young people,”
Plant Director Hans-Peter Kemser emphasised.