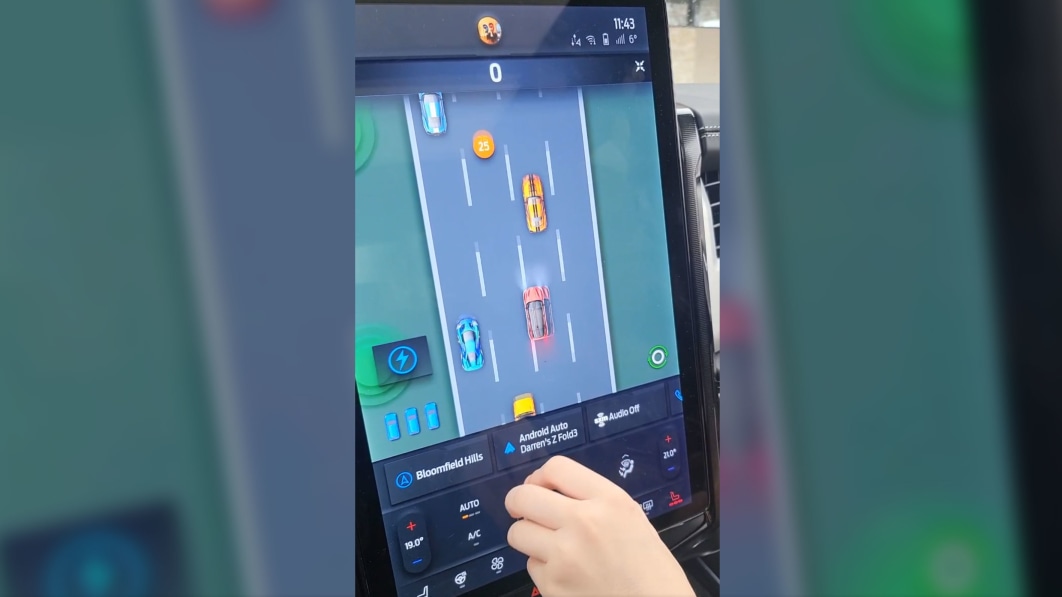 The National Highway Traffic Safety Administration might be devoted to ensuring drivers aren’t distracted while on the go, but automakers are growing just as inclined to ensure you’re never not distracted when you’re stopped. Looks like Ford will be the next automaker to load its infotainment system with games, after Tesla launched its Arcade mode last year and the Mercedes-Benz EQS options list included a game bundle. Darren Palmer, Ford’s VP of global EV programs, posted a video to LinkedIn with the caption, “Some cute little games now on the F-150 Lightning. Proving a hit with my kids in final testing …” We’ll assume it’s his kid’s hand in the video using the volume knob to weave some Ford model — perhaps the Mustang Mach-E — through traffic on a four-lane road. We’ll also assume that since Palmer wrote “games,” there will be more than one available in the system.

This game appears to have all the basics of a good time-waster: simple control, simple objective, easy enough for a kid to play and enjoy, task-oriented just enough for an adult to play and save a sliver of attention for whatever that adult is waiting for. And there’s a secondary game (for us, anyway) of “ID the Traffic.” We spotted a Mustang GT500, an F-150, and a GT. We really wouldn’t mind a Frogger version of this, either.

Back to the NHTSA. The federal agency gave Tesla the stinkeye when a Model 3 driver realized he could play games while driving. Mercedes got the same glare when it was discovered the EQS could play videos — not games, just plain videos — the driver could see while driving. When Jalopnik asked Ford about this Lightning diversion, the automaker replied that “games are only active when the vehicle is in park.”

We hope to find out soon, when the F-150 Lightning launches in a week.