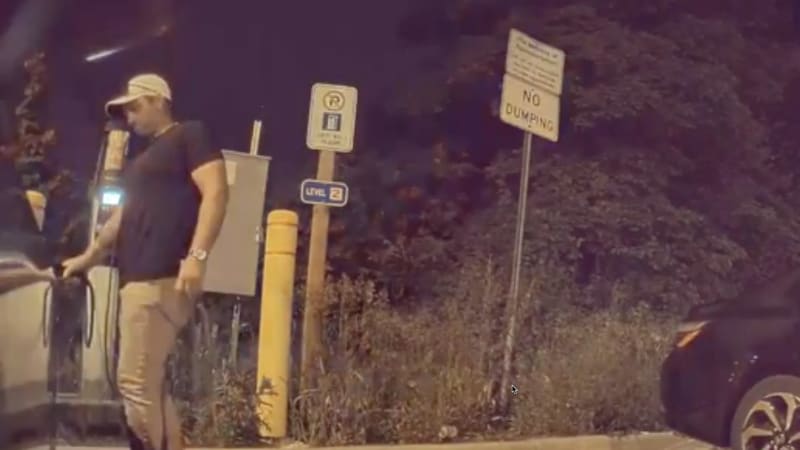 A few years ago, there was some reporting around a trend called “ICEing,” in which drivers of internal combustion vehicles — pickups, mostly — were blocking Tesla Superchargers and other public EV charging spots. No doubt about it, that’s a real jerk move, and at least one truck owner got his comeuppance (“up” being the operative part of that word). Sadly, ICEing, or something along those lines, may still be going on.

A Redditer by the handle OrdinarySpecialist38, who is a Tesla Model 3 owner, posted a video on Reddit that shows the driver of a heavy duty pickup pulling up alongside the Tesla, which was plugged in at an Ontario charging station. This all went down while the owner was napping in the car as it charged. The video, recorded by the Tesla’s Sentry Mode, then shows the pickup driver approach the Tesla. He grabs the charging cord before the security system cuts off, but the awakened Tesla owner said the guy messed with the plug before the owner yelled and scared him off.

OrdinarySpecialist38 asks in his Reddit post, “Anyone know the incentives for this behaviour?” Commenters speculate that the truck owner is angry about the high prices of fossil fuels and is taking it out on a vehicle that doesn’t use them. Good theory, but then again, if this is part of the ICEing mindset, that phenomenon is several years old, originating long before the current global spike in petroleum prices.

There was speculation back when ICEing was getting write-ups that pickup drivers may view Teslas as the toys of “woke” rich people who pose a threat to internal combustion vehicles. The rich-people angle ignores the fact that many pickups cost more than a Tesla. And today, we know the real threat to internal combustion pickups comes from EV pickups like the Ford F-150 Lightning.

ICEing doesn’t just happen with Teslas, but it’s our guess that a holier-than-thou vibe from a few Tesla proselytizers online doesn’t exactly build bridges with the Truck Nuts crowd.

Still, come on. The truck owner here must’ve thought the tailpipe was particularly clever. As Bugs Bunny would say, “What a maroon”:

What can be done to prevent ICEing like this at public EV charging sites? What do you do? What have you heard being done? Any ideas to add @OEVAorg ? pic.twitter.com/VmLRKkDvPm

ICEing got to be enough of a perceived problem that Tesla experimented with ways to combat it, including an app that unlocks blocking devices that rise up out of the pavement. This was in China, which maybe indicates it’s not just an American problem.

Whatever the motivation really was in the Ontario incident — a prank, a car prowl, an act of truck tribalism/terrorism — the same answer applies: The perp here surely would’ve been angry about somebody touching his truck. So how about we all just mind our own business? Live and let live. Golden Rule.

Stay out of each other’s way and keep our hands off other people’s stuff.