BMW Motorrad Motorsport in WorldSBK: Heading to the ‘Cathedral of Speed’ at Assen. 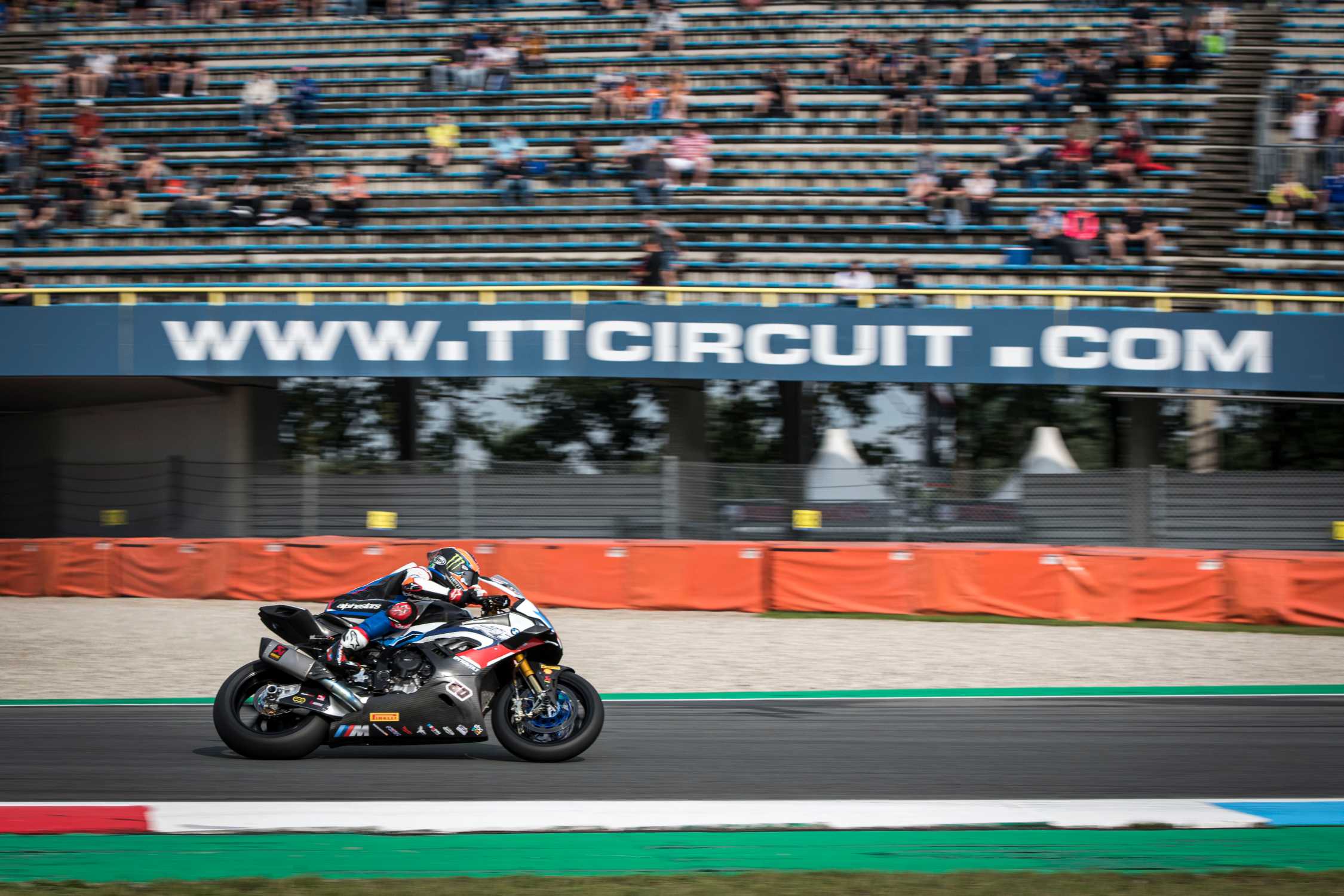 Assen.
The next stop of the 2022 FIM Superbike World Championship
(WorldSBK) will lead BMW Motorrad Motorsport to the famous
‘Cathedral of Speed’. The TT Circuit at Assen (NED) will host round
two of the season this coming weekend (22nd to 24th April). Michael
van der Mark (NED) from the BMW Motorrad WorldSBK Team, who had to
sit out the season opener at MotorLand Aragón (ESP), plans his
comeback at his home round. The final decision will be made at a
medical test on Thursday.

Van der Mark suffered a fractured leg in a training accident with his
mountain bike in early March. After surgery, he fully focused on his
healing process that went very well. If he gets green light from the
WorldSBK medical team, van der Mark will race at the weekend in the
BMW Motorrad WorldSBK Team next to his new team-mate Scott Redding (GBR).

In the Bonovo action BMW Racing Team, riders Loris Baz (FRA) and
Eugene Laverty (FRA) head to Assen with great confidence. They want to
build on the strong results the team achieved at the Aragón season opener.

Quotes ahead of the Assen round.

Marc Bongers, BMW Motorrad Motorsport Director:
“Assen is always something special and I don’t say that just
because I am Dutch. It is great that Michael recovered so well and we
hope that he gets green light to ride his BMW M 1000 RR at the Assen
races. Of course it won’t be an easy weekend for him as he has not
been on the World Superbike for a long time but it would be a first
step into the season for him. In addition, his feedback can be
valuable for our work with all our M 1000 RRs, particularly with
Scott’s bike. After the difficult season opener we have analysed the
data and Scott and the entire team are working very hard to improve
the situation for Assen. The Bonovo action BMW Racing Team
demonstrated at the season opener that they have a very good base and
I am confident that they can make the next step forward at Assen.”

Michael van der Mark, BMW Motorrad WorldSBK Team:
“After the forced break of several weeks I feel ready to return at my
home round in Assen. Of course it depends on the final medical check
on Thursday but I am confident I can get back on my BMW M 1000 RR at
the weekend. The healing process after the surgery went very well. I
also had several treatments that additionally seem to have helped to
speed up my recovery. I regularly trained in the gym, with an adjusted
programme, and that enabled me to keep my fitness at a high level. Of
course, I am not expecting to ride at the top at Assen. I know that it
will be a challenge, as I haven’t ridden my WorldSBK BMW M 1000 RR
since the end of last year and I missed all the pre-season tests in
spring time so I also don’t know all the developments made over winter
and I first need to understand them before I can benefit from them. In
addition, I am feeling very well but am not back to 100 per cent
fitness yet, so for me, the most important thing would be to be back
in action without focusing on any results. Then we move forward step
by step.”

Scott Redding, BMW Motorrad WorldSBK Team: “Assen is
a good track for me, a track that I had a lot of good results on in
the past. It’s a track I really enjoy to ride. I love going to
Holland, the atmosphere is always amazing with the fans there. I also
lived there for a while, so I have some friends there and it feels
very good for me to go to Assen. I think it is maybe a circuit a
little bit better for our bike, so I hope to work on better results
than in Aragón and work from there. So I look forward to the weekend.”

Loris Baz, Bonovo action BMW Racing Team: “I’m
looking forward to Assen. It’s one of my favourite tracks in the world
and I love racing there! It’s a long time  since I have raced there,
although I was there testing in 2019 and 2020. I’m looking forward to
it! It’s always full of fans and definitely one of the best circuits
in the calendar. I think also it suits the BMW M 1000 RR a little bit
better than Aragón, so I will try to keep the same direction, making
some improvements on the bike and continue the good job we are doing
with the Bonovo action BMW Racing Team together with BMW. So, let’s go
rock one of the most amazing tracks of the world!”

Eugene Laverty, Bonovo action BMW Racing Team: “We
had a reasonable start to the season at Aragón. I’ve gelled
fantastically well with the Bonovo action BMW Team and we will build
from here on. Next up is the flowing circuit of Assen and while I’ve
yet to ride the BMW M 1000 RR there I believe that the circuit is
better suited to the strengths of our bike. Our aim will be to qualify
better to give a better track position during the early laps of the
race. The fight at the front is currently out of reach but I’m
confident that we can fight to finish between 6th and 8th position.
That is our target right now.”