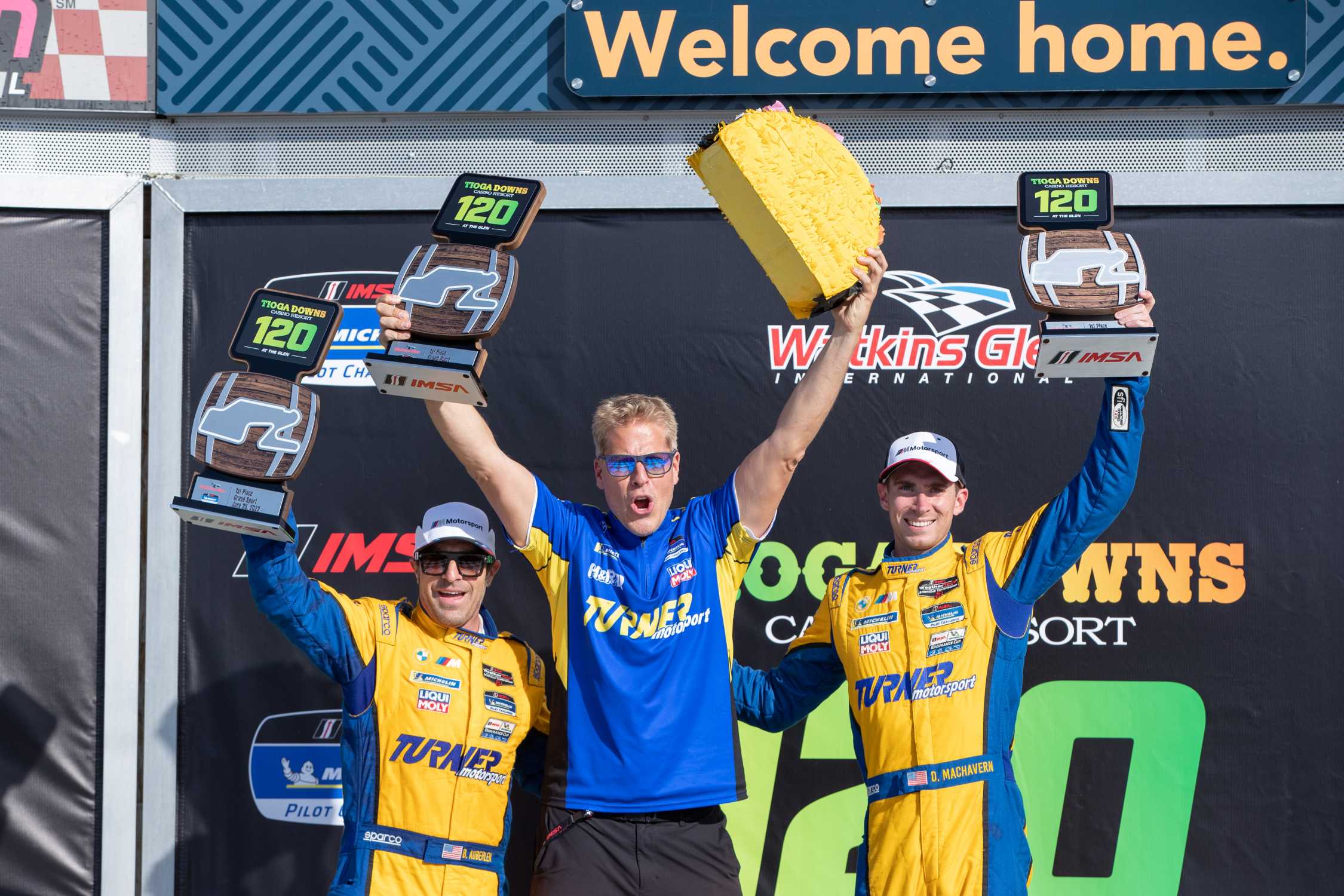 The BMW M Motorsport team Turner Motorsport delivered gripping racing
in the IMSA Michelin Pilot Challenge races at Watkins Glen (USA) – and
celebrated an acclaimed victory with the #95 BMW M4 GT4. The turbulent
two-hour race on Saturday was only going in one direction for Bill
Auberlen and Dillon Machavern (both USA), and that was forwards.
Machavern started the race from seventh on the grid and gained ground
before tyre damage forced him to pit halfway through the race. But
fortunate timing with one of the four yellow phases overall in the
race enabled the #95 to keep up with the frontrunners.

IMSA record holder Auberlen took over for the final stint and wowed
fans with his famous overtaking manoeuvres once again. He was in fifth
place with 20 minutes to go, but he only needed eight minutes to get
past his rivals and take the lead. His manoeuvre to overtake Mercedes
driver Pilot Christian Szymczak (USA), which saw him take the lead,
was voted the move of the race.

After difficult races thus far, this was the Auberlen/Machavern duo’s
first win of the season. “I could run really hard because it was kind
of do-or-die, and I knew that going up against people who were in the
championship, I could try moves that are a bit lower percentage than I
normally would,” Auberlen said. “I would not have done that move early
in the season, but Szymczak was nice enough to give me enough room and
I tried to give him as much room as I could. It was fun – I had a
really good time out there.”

Their team-mates Vincent Barletta and Robby Foley (both USA) finished
the race in the #96 BMW M4 GT4 in ninth place. Stephen Cameron Racing
finished in 23rd place with the #43 BMW M4 GT4, in which Sean Quinlan
and Greg Liefooghe (both USA) took it in turns at the wheel.

After a two-month break, the Nürburgring Endurance Series (NLS)
season returned to action at the weekend. And the BMW M Motorsport
team Walkenhorst Motorsport took on one of the leading roles. In
qualifying, Christian Krognes (NOR) in the #34 BMW M4 GT3 secured pole
position with a time of 7:54.472 minutes.

In the four-hour race, Krognes and his team-mate Sami-Matti-Trogen
(FIN) battled for the win down to the wire, and were only just beaten,
finishing in second place on the podium. Their team-mates Jörg Müller
(GER), Mario von Bohlen (GER) and Ben Tuck (GBR) finished seventh in
the #35 BMW M4 GT3.

The BMW M Motorsport teams also secured several class wins once
again. Walkenhorst Motorsport won the SP9-Am class with the #36 BMW M4
GT3 driven by Henry Walkenhorst and Jörg Breuer (both GER). The BMW
M240i class was won by Schnitzelalm Racing with the #673 BMW M240i
Racing, with Michael Sander, JayMo Härtling and Tim Neuser (all GER)
taking it in turns at the wheel. Adrenalin Motorsport Team Alzner
Automotive got their next class win in the VT2-R+4WD category, with
Daniel Zils, Oskar Sandberg (both GER) and Sinde Setsaas (NOR) in the
cockpit of the #500 BMW 330i. In the V4 class, Juha Miettinen (SUI)
and Dan Berghult (SWE) won in the #730 BMW 325i, and victory in the H4
class went to Hofor Racing with Michael Kroll, Chantal Prinz and
Alexander Prinz (all SUI) in the #605 BMW M3 E46 GTR.

The next round of the BMW M2 CS Racing Cup NLS was also held as part
of NLS4. Tobias Vazquez-Garcia (GER) in the BMW M2 CS Racing with car
number 883 got the win. Adrenalin Motorsport Team Alzner Automotive
finished in second and third place on the podium. Yannick Fübrich
(GER), David Griessner (AUT) and Brett Lidsay (GBR) were second in the
number 870 car, their team-mates Stefan Kruse, Guido Wirtz and Andreas
Winkler (all GER) crossed the finish line in third place with the #871.

After the fantastic weekend in May with two wins at the Red Bull Ring
(AUT), BMW M Motorsport team Schubert Motorsport experienced a
difficult third round of the ADAC GT Masters season in Zandvoort in
the Netherlands. The team were unlucky in the rain roulette in the
first qualifying session on Saturday, and had to start the first race
from the back of the grid with both BMW M4 GT3. Jesse Krohn (FIN) and
Nick Catsburg (NED) moved their way up the field well, making it into
the top 10 with the #20 car. However, an accident forced them to
retire in the final phase of the race. And it wasn’t long before their
team-mates Ben Green (GBR) and Niklas Krütten (GER) in the #10 BMW M4
GT3 suffered the same fate. In the second race on Sunday, Green and
Krütten finished in eleventh place, while Krohn/Catsburg were forced
to retire once again. Green and Krütten still lead the Junior
standings of the championship.

DTM: Bruno Spengler to line up in the BMW 320i STW at the Norisring.

BMW M works driver Bruno Spengler (CAN) returns to one of his
favourite tracks this weekend. The 2012 DTM champion will be taking
part in the DTM Classic Cup at the Norisring (GER), where he
celebrated five of his 16 DTM race wins overall. Spengler will take
the wheel of the BMW 320i STW from the 1998 season, which is the car
with which Johnny Cecotto (VEN) celebrated his second title in the
Super Touring Cars Championship of that time. The car still has the
original design. This will be Spengler’s second sporting time travel
in the space of a week. The Canadian drove the BMW Z4 GT3 with the
Michel Vaillant livery at the Goodwood Festival of Speed last weekend;
this was the car in which he contested the 2015 edition of the 24
Hours of Spa-Francorchamps alongside Alex Zanardi (ITA) and Timo Glock (GER).

The BMW M Motorsport team Century Motorsport celebrated their next
GT4 win in the British GT Championship at the weekend. Jack Brown and
Will Burns (both GBR) won the second of the two races at Snetterton
(GBR) with the #90 BMW M4 GT4. The duo finished in ninth place in the
first race. Their team-mates in the BMW M4 GT4 with car number 9,
Chris Salkeld and Tom Rawlings (both GBR), finished the two races in
fifth and ninth place in the GT4 class. In the new #91 BMW M4 GT3 of
Century Motorsport, Betty Chen (TPE) shared the cockpit with Joel
Eriksson (SWE). The duo crossed the finish line in P14 in the first
race, and finished 29th in the second race.

The ESET Cup Series was in Poznan, Poland for the third round of the
season at the weekend, where the Trevor Racing team secured two
further podium finishes with the new BMW M4 GT3. Gregor Zsigo (SVK)
and Dennis Waszek (CZE) finished in second place in the endurance
race. Zsigo also finished in third place on the GT3 class podium in
the second of the two sprint races, having narrowly missed out on the
podium in the first sprint race after finishing in fourth place.

The L’Espace Bienvenue team looks back on a successful weekend in the
GT4 France. At the Grand Prix d’Albi (FRA), Ricardo van der Ende (NED)
and Benjamin Lessennes (BEL) added to their trophy collection with the
#17 BMW M4 GT4. In the first race on Saturday, the duo finished in
second place, trailing by just 0.127 seconds. They built on this in
race two on Sunday, and won with a clear lead of almost 14 seconds.

The TC France was also in Albi at the weekend, and the team of VSF
Sport – amplitude automobile finished on the podium in all three
races. In race one, Jean-Matthieu Leandri (FRA) in the #18 BMW M2 CS
Racing finished in second place to celebrate his first podium in the
series. In the second race, Leandri crossed the finish line in second
place once again. In the third race, his team-mate Benoit Eveillard
(FRA) finished in third place in the #41 BMW M2 CS Racing.

At the fifth race weekend of the British Touring Car Championship
(BTCC) at Croft (GBR), Colin Turkington (GBR) showed yet again why one
of the names he goes by is “King of Croft”. With a convincing
performance, the Team BMW driver secured pole position in qualifying
on Saturday. Then in the races on Sunday, Turkington finished on the
podium twice with his #50 BMW 330e M Sport. He finished in P2 and P3
in the first two races. In the closing race, Turkington crossed the
finish line in sixth place. His results saw BMW retake the lead in the
manufacturers’ standings.