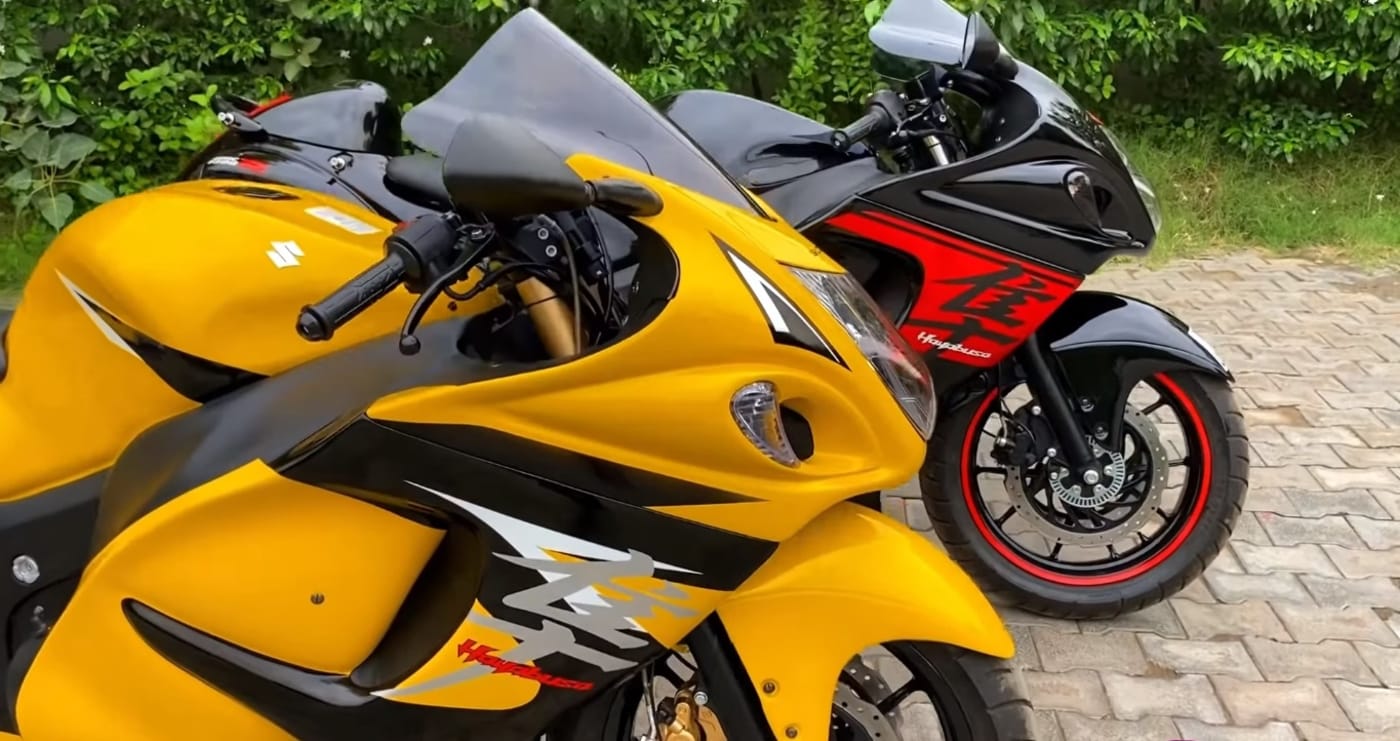 The changes you see here are purely visual as no change has been made to the engine of the bikes. Both of them are powered by the same 199.5cc, single-cylinder, liquid-cooled engine. Pure attention to detail can be spotted on these Hayabusa replicas as they look pretty similar to the actual model of the superbike.

Mechanically, the stock model of the Suzuki Hayabusa is powered by a 1340cc, fuel-injected, four-cylinder, liquid-cooled engine producing 200 HP of maximum power at 9500 rpm and a peak torque of 155 Nm at 7200 rpm. The engine comes mated to a 6-speed gearbox.

The modification is neat, leaving no hint for an amateur eye to find a flaw within the design. The exhaust cans are huge, covered in gloss black and chrome finish for a contrasting look. The alloy wheels of the stock models have been painted in the black shade while the side fairing flows neatly into the front fairing area with a single headlight. The visor is huge and practical, leaving the rider partially protected from high-speed winds at triple-digit speeds.

For further details and information related to price, you can contact:

As far as the stock model is concerned, powering the Bajaj Pulsar NS200 is a 199.5cc, single-cylinder, liquid-cooled engine that is now BS6-compliant and offers an increased power and torque output. The engine is now capable of churning out 24.5HP and 18.5Nm when compared to the 23.5HP and 18.3Nm offered by the BS4 version. The engine remains mated to a 6-speed transmission. At present, the stock model of the NS200 is available with an ex-showroom price tag of INR 1.40 lakhs.

Powering the Bajaj Pulsar RS200 is the same 199.5cc, single-cylinder, liquid-cooled, fuel-injected engine that is now BS6-compliant. The motorcycle continues to offer a maximum power of 24.5HP @ 9,750 rpm while the peak torque has increased by 0.1Nm and now stands at 18.7Nm @ 8,000 rpm. The engine remains mated to a six-speed transmission. The BS6-compliant Pulsar RS200 is now available in the markets with an updated price tag of INR 1.69 lakhs. The prices mentioned here are ex-showroom Delhi.

Disclaimer: As per a recent ruling by the Supreme Court, modifying a vehicle in India is illegal. If you do modify your bike/car, it needs to get certified by the RTO (Regional Transport Office).