Audi battery testing center in Gaimersheim: Where range and fast charging come together 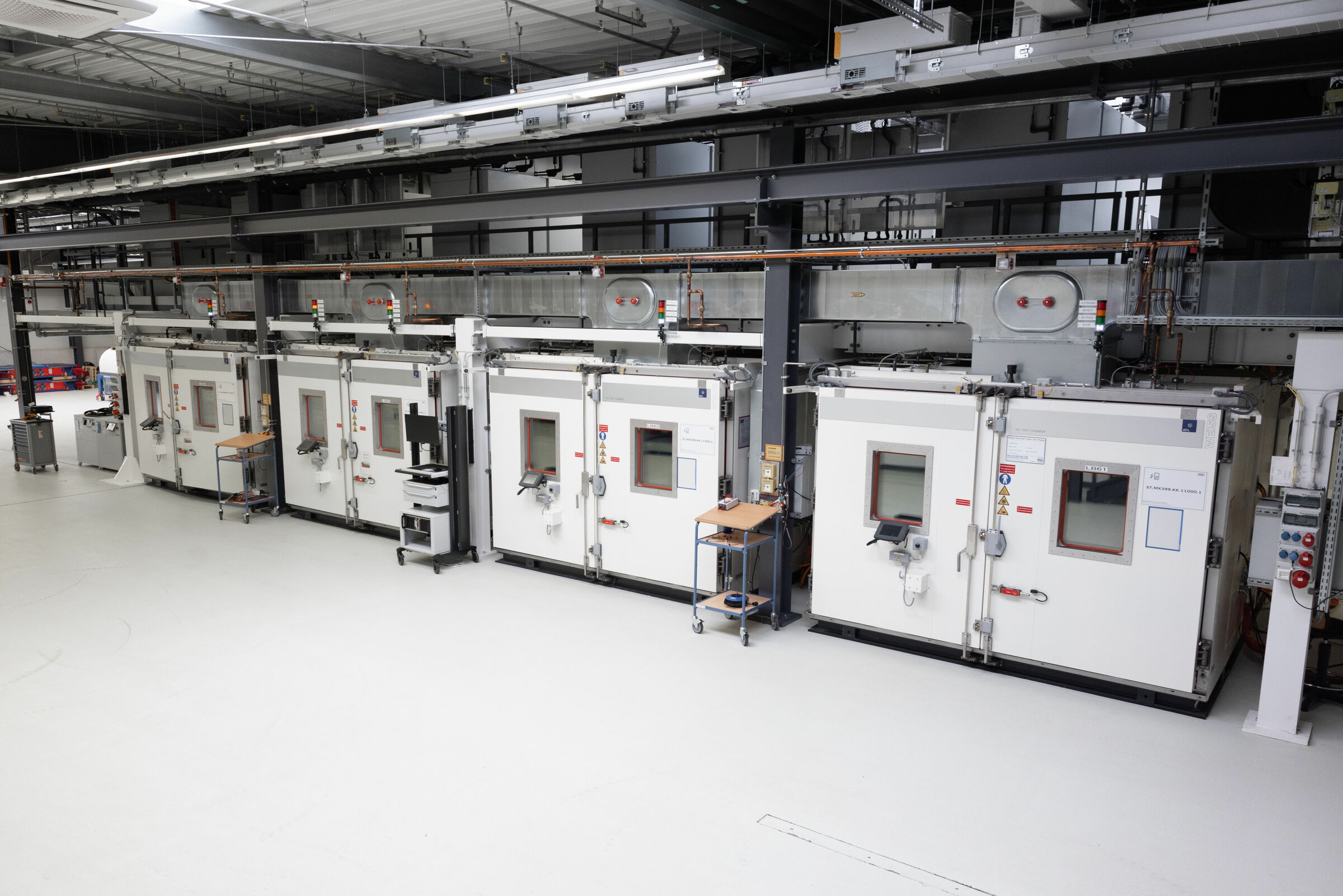 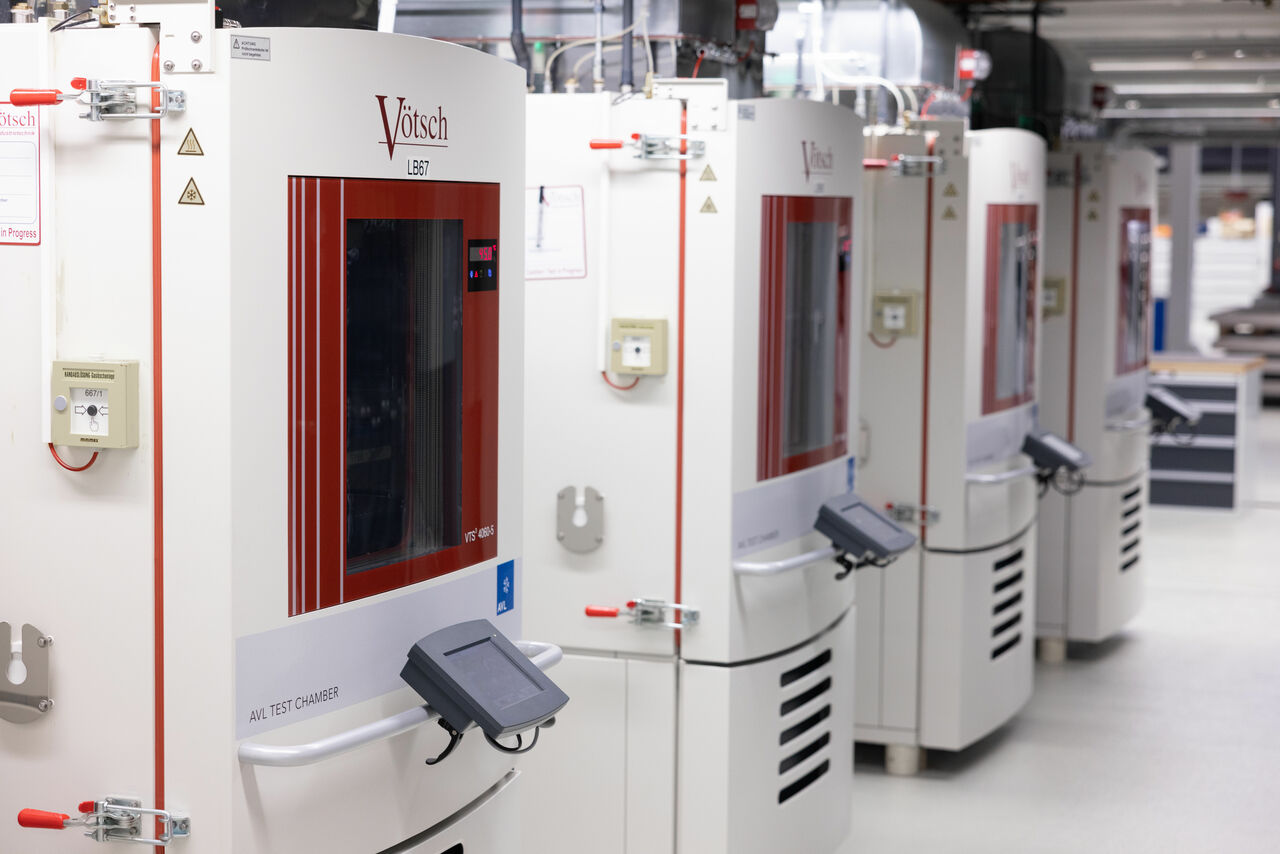 Black, red, gold – these colors indicate the charging status of a battery cell. During charging, lithium ions are deposited in the graphite anode, and the graphite changes its color according to the charging status. When discharged, graphite looks black; charged halfway, it turns red; and when fully charged, graphite appears golden. “This lets us see and assess the charging status,” explains Dr. Bernhard Rieger, cell expert at the Audi battery testing center in Gaimersheim. When electrodes are charged, they don’t do so evenly. An electrode will charge the most quickly where the highest number of lithium ions are present. This results in a charging status gradient. Ideally, everything would be the same color. But that would require an extremely thin electrode that would in turn have a neglectable capacity. “When it comes to fast charging lithium ion cells, the art lies in precise current control to prevent overcharging the anode in the golden areas. That would result in premature aging,” says Rieger. “This means our task lies in ensuring the ideal operation of lithium-ion cells to achieve the best possible range and charging performance.” For Audi customers, this guarantees a battery electric vehicle with both excellent range and charging performance. “Once the basic need for range has been met, charging capacity becomes more relevant,” adds Rieger.

The Gaimersheim cell technicians thus face conflicting goals. “We have a limited package available to us, into which we have to pack as much energy as possible,” comments Rieger. “But we also want to be able to recharge it as fast as possible.”

The conflict lies in the fact that the greater the energy density, the longer it takes to charge the cell. This means the cell technicians are facing a balancing act that requires them to at least keep charging times at a constant while increasing energy density. In order to charge a lot of energy quickly, charging capacity is an early point on the agenda for project development. In this area, no less than two Audi models are setting standards today: The cells in the 93 kWh high-voltage battery used in the Audi e-tron GT quattroe-tron GT quattro: Combined electric power consumption in kWh/100 km: 19.6–18.8; combined CO2 emissions in g/km: 0″ type=”WLTP” class=”inline-consumption-data”/> can charge from 5 to 80 percent with up to 270 kW of power in only 22.5 minutes in ideal conditions. The Audi e-tron, which first hit the market in 2019, is still considered the benchmark today with its unique plateau-like charging curve, where the charging power of up to 150 kW is available for a large part of the charging process.

“We invest a great deal of time in developing ideally controlled cells and current control to achieve as fast a charging time as possible coupled with high efficiency and a long service life,” explains Rieger. So in Gaimersheim, the focus is not limited to battery cells alone: The entire battery system with its electronics, thermal management system, and high-voltage periphery are equally relevant for the Audi fast charging concept. “Our systems are designed from day one with fast charging in mind because it is very difficult to increase charging capacity later on. Only a perfectly balanced total package where every detail counts from the earliest phase will reach the desired charging properties.”

From test stands to pre-series production – everything under one roof

In addition to the criteria of energy density and charging capacity, the battery cells also meet the highest service life and safety standards. To this end, the individual cells and the battery system as a whole have to pass numerous tests at the approximately 4,400-square-meter center in Gaimersheim. Each vehicle project entails a variety of service life and fast charging tests on several hundred cells.The cells have to run through different charging and load profiles that the Gaimersheim technicians perform in climatic chambers at temperatures between -30 and +60 °C. “Our tests and checks begin at an early sample phase about four years before the start of production to allow us time to make readjustments where necessary”, explains cell expert Rieger. In order to assess the cells’ aging phenomena, they are also exposed to high temperatures for the space of about a year. This allows Audi to simulate an in-car service life of up to 15 years. Service life test stands in Gaimersheim also allow the technicians to speed up reconstructed mileage scenarios of about 300,000 kilometers. Other tests include crash and overcharge testing as well as various safety tests. Diverse driving scenarios can be simulated in order to optimize the high-volt components’ operating strategy or thermal management. “This application allows us to perform the best possible fine-tuning on our batteries,” says Rieger. “New findings from cell measurements are rerouted right back to the virtual battery models so we can observe the effects on the vehicle.” Gaimersheim is also home to a construction facility for prototype batteries; here, employees build the high-voltage batteries from the ground up all the way to pre-series production.

“At Gaimersheim, we have the competency to fine-tune our cells’ design and operational strategy to achieve properties that are perfect for Audi,” sums up Rieger. “How can I operate and build a battery to get the most use out of it? That’s a question we answer every day at the Gaimersheim battery testing center.”