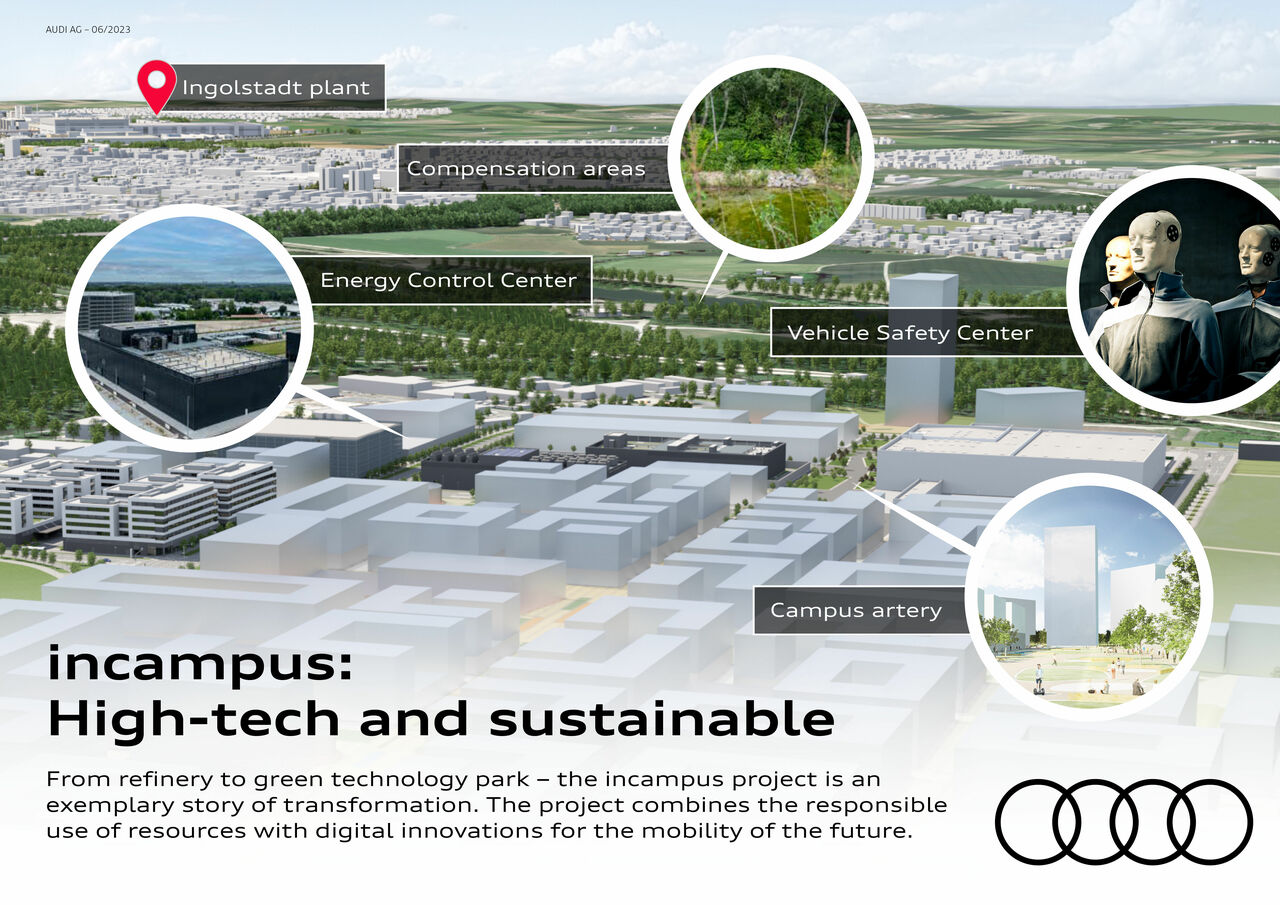 The Bayernoil (formerly ERIAG) refinery in Ingolstadt helped shape Bavaria’s transformation from a place of agriculture to one of industry. Located not far from the Danube, the 75-hectare site is well connected to the Bavarian transportation network. Audi’s headquarters are just a few minutes’ drive away. With the innovative technology park on the former refinery site, IN-Campus GmbH, a joint venture between AUDI AG and the city of Ingolstadt, is addressing pressing issues such as digital innovations and sustainability. With the project house, for example: a 42,000-square-meter idea factory for future technologies. The automotive software company CARIAD has already moved in with its center of competency. The A 9 highway in the immediate vicinity has served for years as a digital test field for the development of automated driving. The “First Mile”, a development and demonstration route for 5G-based mobility applications, runs from the IN-Campus toward the highway, practically extending the test field right to the campus grounds. Also already under construction is the Vehicle Safety Center with a modern crash arena, which will offer Audi a wide range of opportunities in the development of its vehicles.

Redevelopment as a role model

From conception to use, the IN-Campus is designed through and through for sustainability. Key here is that no new areas were sealed for the new technology park; instead, existing space was redeveloped and revitalized. An area of 22 hectares of the yet recently unused site was polluted and in need of remediation, as some 1,200 exploratory drilling operations and 50,000 laboratory analyses revealed. The site had been undergoing full remediation since 2016, and the process is now complete. 900 tons of heavy oil, 200 tons of volatile pollutants, and 100 kilograms of perfluorinated chemicals were removed in an environmentally sound manner. The differences in elevation caused by the remediation efforts have been leveled out again. Around 444,000 cubic meters of soil were moved over an area of 650,000 square meters – the equivalent of more than 32,000 truckloads.

IN-Campus GmbH relied on highly specialized and low-emission methods for the remediation of the site: To protect the nearby Danube floodplains from pollution, contaminated groundwater was and is pumped up via ten wells before being cleaned. This method of hydraulic groundwater treatment is expected to remain in operation until 2028. Air sparging was used to remove volatile hydrocarbons. The method is one by which air is blown into the ground through hundreds of pipes and, after absorbing pollutants in the soil and groundwater, is extracted before being cleaned again. A novel process using steel honeycombs lowered into the ground made high-precision excavation of polluted soil possible. A soil washing facility used water to clean pollutants from the soil grains, making 90 percent of the soil usable again.

With all remediation processes monitored and recorded in a geo-information system by independent experts, future soil remediation projects can benefit from the experience gained here. Monitoring of the successful remediation efforts will be concluded in 2023. As part of the project, IN-Campus GmbH is also developing new areas to promote biodiversity: 15 hectares of the redeveloped site will be returned to nature as a compensation area. This will result in the creation of a new alluvial forest biotope between the technology park and the banks of the Danube.

The energy revolution in Ingolstadt

Ecology and sustainability are also set to play a central role in the utilization phase: The vision of the IN-Campus is one of a zero-energy campus. To this end, the entire quarter is designed to be energy-efficient, with an initial photovoltaic system on the green roof of the Energy Control Center providing green electricity. While the IN-Campus currently also obtains green electricity from the regional utility, in the future the technology park will generate as much renewable energy as it consumes. Additional photovoltaic systems, waste heat recovery, energy storage, and smart control systems are further components of the zero-energy strategy.

The modular energy concept of the IN-Campus relies on three basic building blocks: the LowEx network, reversible heat pumps, and a cross energy concept (CEC). The LowEx network, a water-based piping network, and reversible heat pumps are used to heat IN-campus buildings with waste heat from other buildings. And there will be plenty of it – especially in the future state-of-the-art IT Center, where the expected heat output will reach 2 megawatts. A win-win situation: The IT Center is cooled, higher-value energy (or exergy) is saved, while at the same time energy that would otherwise go to waste (anergy) is re- or upcycled.

The treatment method for groundwater purification also has a thermal application: The ten wells extract a total of up to 200 cubic meters of water per hour from below ground. But before it seeps away again elsewhere after treatment, this water is also fed into the LowEx network and used for cooling or heating by means of heat exchangers. This is a synergy effect that reduces the need for fresh groundwater, in turn lowering expenses for this valuable resource. The groundwater plant’s heating and cooling capacity is around 1.5 megawatts.

Surplus heating and cooling energy is already being channeled into three thermal energy storage tanks in the Energy Control Center, which together hold a total of 3,000 cubic meters. In addition, the former fire extinguishing basin, which initially served as a buffer basin during remediation, is now being reactivated as a further large-scale heat storage facility with a capacity of almost 29,000 cubic meters. The stored heat or cold ensures a steady supply of energy, which in turn increases efficiency and ensures the economical, sustainable use of valuable resources on the site.

A smart cross energy concept (CEC) is the “brain” of the IN-Campus: It manages the interaction of all technical components, controls generators and consumers of energy, stores and converts surplus energy, absorbs consumption peaks, and shifts loads. The smart central control system also draws on current weather forecasts. Other innovation components for generating, converting, and storing energy are gradually being integrated into the modular energy system.

For its innovative and sustainable approach, the IN-Campus has already received an award from the German Sustainable Building Council (DGNB). In addition to the energy concept, the DGNB rating also takes into account the fact that the IN-Campus was built without sealing any new areas, that new biotopes were created, that the campus artery serves as a meeting area, and that innovative smart city and mobility concepts are used.

At Audi, new ideas and professional cooperation to advance innovation point the way to the future. As a place of collaboration for Audi and its technology partners, the IN-Campus already offers a glimpse of what this future looks like. And in doing so, one thing becomes clear: The IN-Campus is not some anonymous technology park – it is an integral part of the city of Ingolstadt. This is exemplified by the approximately 50-meter-wide campus artery – an approximately one-kilometer-long avenue with green areas that creates spaces for communication and meeting for employees and visitors.

Further information about the IN-Campus technology park can be found in the AMC.