30 years of quality and innovation in tooling and parts production 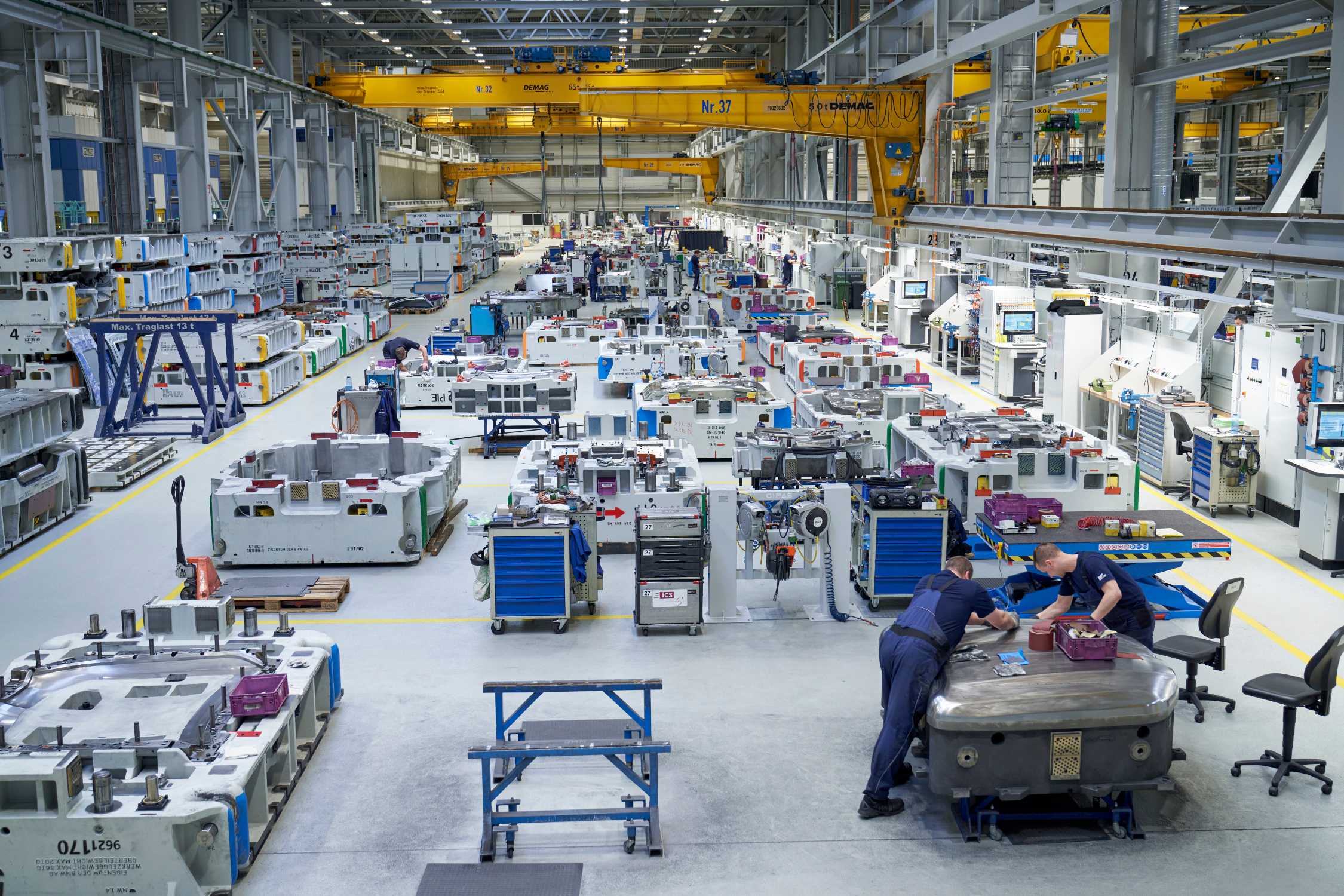 Eisenach. BMW Group Plant Eisenach officially opened
for business in 1992. Located in the German state of Thuringia, it has
played a major part in the heritage of the BMW Group and seen constant
upgrades over the years. It is now the company’s largest tooling
facility worldwide. The original tool-making section has been
transformed into a highly digitalised, industrialised press tooling
operation. The former workshop for complex one-off parts is now a
super-efficient part and component manufacturing facility for small
and very small production runs.

BMW Group Plant Eisenach has a special status within the BMW Group
production network (which comprises 31 manufacturing operations in 15
countries). It produces the press tools that give wing, roof and
engine bonnet of nearly every BMW, MINI and Rolls-Royce model their
distinctive shape. The BMW Motorrad plant in Berlin also benefits from
the services of the Thuringian plant.

As model diversity increases and design requirements become ever more
discerning, the BMW Group’s tooling plants in Eisenach, Munich and
Dingolfing are rising to the challenge. “Tooling is of quintessential
importance to our production system,” says Milan Nedeljković, BMW
Group Board Member for Production, “because without press tools, we
couldn’t give our vehicles their unmistakable styling.”

But it’s not only for tooling that the BMW Group relies on the
expertise, innovativeness and quality of Plant Eisenach: the facility
also produces almost 230,000 sheet metal body parts a year for BMW,
Rolls-Royce and BMW Motorrad models. The product range currently
includes all the roofs for the Rolls-Royce Wraith, Ghost, Phantom and
Cullinan as well as all the wings for the M3, M4, M5 and M8 by BMW M.

Quality, precision and innovation – Made in Eisenach

BMW Group Plant Eisenach first started delivering press tools for
structural components in September 1992. Operations were launched with
equipment for the third-generation BMW 7 Series, among others. The
current, seventh-generation BMW 7 Series – which made its world debut
on 20 April – is also formed by tools from Eisenach. The press tools
for the roof, wings and engine bonnet of the new 7 Series – which also
includes the very first fully electric BMW i7 – were all developed and
produced here. Every year Plant Eisenach makes approx. 140 tools for
BMW, MINI, Rolls-Royce and BMW Motorrad models. It has advanced over
the years to become the BMW Group’s centre of excellence for outer skins.

Eisenach is also important for the production of sheet metal parts
for the BMW Group. For the Rolls-Royce marque, it is even the main
supplier, currently delivering some 6,500 parts a year to Rolls-Royce
Motor Cars in Goodwood. As a customer for parts, BMW Motorrad is
larger still, sourcing over 100,000 fuel tank components from Eisenach
for models such as the BMW R 1200 RS, BMW S 1000 RR and F 700 GS. But
the most sheet metal body parts are made for BMW vehicles, with more
than 120,000 wings and engine bonnets dispatched to vehicle plants
across the globe for models such as the BMW M3, BMW 4 and BMW 8 Series.

Back to the roots

At the official inauguration of Plant Eisenach 30 years ago, Eberhard
von Kuenheim, Management Board Chairman at the time, commented:
“Eisenach is where we have our roots as a carmaker. So the reason
we’re back is partly emotional.” The decision in 1990 to locate a
large tooling works at the site in Thuringia had partly been born from
the desire to return to the cradle of BMW as an automotive manufacturer.

It was with the acquisition of the vehicle plant in Eisenach in 1928
that the Bayerische Motorenwerke first ventured into the world of
vehicle production. Operations were launched in 1929, with the BMW
3/15 PS, and Eisenach also went on to manufacture the legendary BMW
328. It remained the birthplace of all BMW cars until the early 1940s,
when World War II and the subsequent division of Germany put an end to
BMW’s activities there. Not until after German reunification was the
company able to return to this landmark in its heritage.

The ground-breaking ceremony marking the start of construction work
for the new facility in Thuringia was held in October 1990. Just two
years later, Plant Eisenach was officially inaugurated and delivered
its first tools. It has undergone constant extension ever since, with
further investments being made in new machinery and systems all the
time. The BMW Group has invested €208 million in total since the new
plant was founded.

Key investments over the last few years include the two
latest-generation servo induction presses, which optimally prepare
press tools for series production. The first went on-stream in 2016,
the second in early 2022, having been added with the latest plant
extension. Servo induction presses simulate forthcoming series
production processes and digitally transmit the settings data to the
presses in the plants. This significantly reduces the amount of time
needed to set up new tool systems for operations and is just one
example of how Plant Eisenach contributes to constant quality
enhancement and highly efficient structures in the BMW Group
production network.

The most comprehensive upgrade in the history of the plant

Between 2001 and 2016, Plant Eisenach was gradually upgraded, but its
largest extension to date started with the ground-breaking ceremony in
2019. It came at an investment of €38 million and adds another 13,500
square metres to the facility. With a total of over 34,000 square
metres, Plant Eisenach is now the largest tooling plant in the BMW
Group in terms of area. The inauguration of the new extension
coincides with the plant’s 30th anniversary.

The latest upgrade affects every area of the facility, from
mechanical production, tooling and the press shop to parts production,
quality assurance, administration, logistics and parking areas. It is
an investment not only in additional capacity but also in the future
viability of the plant. The focus throughout has been on
sustainability and the efficient use of energy and resources. Like all
BMW Group plants, Eisenach is supplied purely with energy from
renewable sources. Waste steel and aluminium from production are
avoided as far as possible, and what cannot be avoided is returned to
the material cycle to be reused.

Highly qualified, highly motivated employees as a factor for success

A key factor in the competitiveness of Plant Eisenach is the
employees. “Our team are highly qualified, flexible and committed, and
the growth and development of Eisenach would never have been possible
without them,” says Robert Frittrang, Managing Director of BMW
Fahrzeugtechnick GmbH since 1 March. “As we celebrate our anniversary,
I would like to say a big thank-you to them all – because more than
anything, the success of any company depends on its team.”

Plant Eisenach currently employs some 300 people, 16 of whom are
trainees and 10 are students doing combined vocational training and
university studies at the University of Gera/Eisenach. When it first
opened, in 1992, the workforce consisted of around 150 people. Since
then, the number has doubled and will continue to rise over the next
few years, with plans for another 40 or so associates to join the team
by the end of 2024. Investments in the recruitment of specialists and
future specialists continue.

Ready for the future

The extensions and investments of previous years have set the course
for the future at Plant Eisenach. In the eyes of Plant Director Robert
Frittrang, Eisenach is ready for the upcoming challenges and
transformation processes: “Production of the future is based on lean,
flexible processes. It is sustainable and circular and uses the full
potential of digitalisation. In my view, Plant Eisenach is ready for
the future in every one of these areas.”