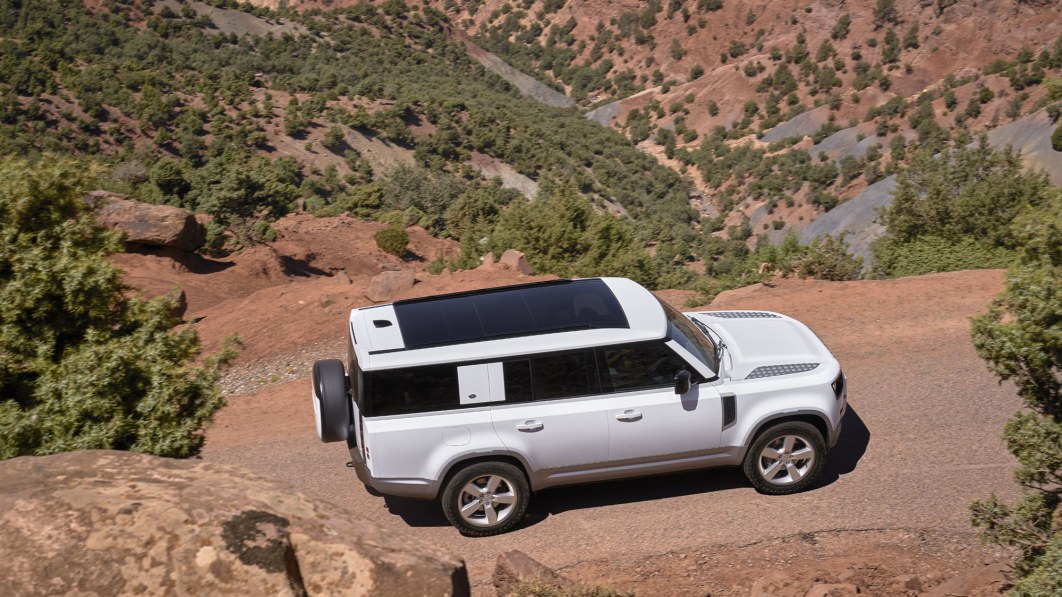 Land Rover resurrected the decades-old 130 nameplate for a bigger evolution of the Defender that offers seating for eight passengers. Due out for the 2023 model year, the three-row Defender 130 stands out as the biggest member of the Land Rover family by a significant margin.

In old Defender-speak, the 130 badge denotes a four-door pickup. In new Defender-speak, it’s an eight-seater SUV that stretches 211 inches long, 79 inches wide with the door mirrors folded, and 77.6 inches tall. It rides on a 119-inch wheelbase. For context, the Defender 110 has the same width, height and wheelbase as the 130 but it measures 197.6 inches long (including the rear-mounted spare tire).

Land Rover added over 13 inches of sheet metal to the Defender’s rear overhang so telling the 110 and the 130 apart is relatively easy. The bottom part of the rear overhang is noticeably upswept to achieve a departure angle of 28.5 degrees (compared to 40 degrees for the 110). Look closely and you’ll spot some of the other, more subtle design changes that differentiate the two models: the rear light bezels have been redesigned, a hard cover for the spare tire is available, and Sedona Red (shown in our gallery) joins the color palette. Buyers can also select an optional appearance package called Extended Bright Pack that bundles an array of Ceres Silver Satin exterior accents.

Inside, Land Rover claims that the Defender 130’s third-row seat is big enough for three adults to comfortably travel on. The rest of the cabin is standard Defender fare with a handful of exceptions: the 130 is available with a four-zone climate control system, it features Noble Chrome and Ceres Silver accents, and it’s offered with Natural Light Oak wood trim inspired by driftwood. Land Rover’s 10.25-inch Pivi Pro touchscreen comes standard, though upmarket trim levels receive an 11.4-inch unit, and what3words compatibility is included as well.

Space is the 130’s main selling point. Fold down the second- and third-row seats and you’ve got 80.9 cubic feet to fill. Flip up the second-row seats and that figure drops to 45.3 cubes (compared to 34 in the 110). Leave all three rows up and trunk space checks in at 13.7 cubic feet.

While the 90 and 110 are offered with a V8 engine, the 130 is six-cylinder-only — for the time being, at least. The entry-level engine is a 3.0-liter straight-six that’s turbocharged to develop 296 horsepower and 347 pound-feet of torque. Alternatively, an evolution of this six rated at 395 horses and 406 pound-feet of twist is available. Both work with a 48-volt mild-hybrid system, and both spin the four wheels via an eight-speed automatic transmission. The 130 hits 60 mph from a stop in 6.3 seconds in its quickest configuration, which is plenty all things considered, and it’s capable of hauling and towing 1,760 pounds and 8,200 pounds, respectively.

Land Rover fits every Defender 130 with an electronic air suspension system that lets the driver adjust or lower the ride height as-needed. The SUV is capable of carrying you and seven friends through 35.4 inches of water with its suspension pumped all the way up.

On sale now across the nation, the 2023 Land Rover Defender 130 starts at $68,000. Buyers will initially have five trim levels to choose from: S, SE, X-Dynamic SE, X and First Edition. Only offered for a short time, the latter is offered in three trim-specific color configurations and it’s packed with a long list of standard features including heated second- and third-row seats and a Meridian sound system.