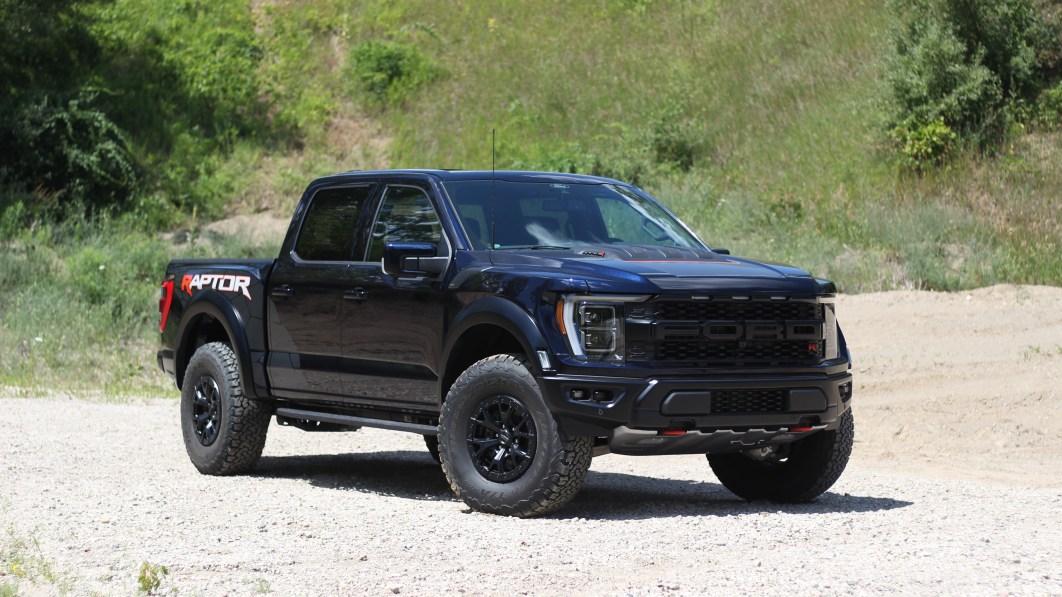 Here it is, the 2023 Ford F-150 Raptor R. Ford finally put a V8 engine back into the Raptor, but it’s not just any V8. This ultimate Raptor is powered by the supercharged V8 engine from the Mustang Shelby GT500.

Of course, it’s not exactly the same as the engine out of the Shelby, because Ford had to modify it for off-road pickup duty — Ram had to do the same when it dropped the Hellcat engine into the Ram 1500. Ford installed a new pulley and recalibrated the supercharger to optimize low-end and mid-range torque, since that’s where pickup owners will be spending most of their time. It’ll benefit you in around town driving, low-speed off-roading and when towing (max towing increases by 500 pounds with the R). Both the exhaust and intake are changed, too. Ford developed new cast stainless steel exhaust manifolds, citing better durability. The exhaust system features a new valved pass-through muffler design — deleting the trumpet design from the V6 — that allows both quiet and (very) loud modes. Plus, it gets a wider air intake inlet to increase air volume by 66% along with a new conical air filter. The last changes it made from Mustang to truck involve oil management. Ford added a unique oil cooler and filter, and it’s also using a deeper oil pan that enables you to send it up steep grades while still maintaining proper engine oil cooling.

All of the above results in an engine that Ford rates at 700 horsepower and 640 pound-feet of torque. For those counting, that’s 60 horsepower less and 15 pound-feet of torque more than the GT500’s version of this engine. Ford says that it’s shifted the torque curve down into the lower rpms with the supercharger changes, which explains the new priority for torque over peak horsepower. Of course, these numbers put it just barely shy of the Ram 1500 TRX’s output of 702 horsepower and 650 pound-feet of torque. Ford doesn’t get the bragging rights of “most powerful,” but it is claiming “most torque dense engine” in an off-road pickup. As a reminder, Ford extracts this amount of power out of a notably smaller engine than the Ram — the Ford V8 is a 5.2-liter engine, whereas the Ram’s Hellcat engine is a 6.2-liter.

If you wanted acceleration numbers, tough luck. Ford isn’t saying what the Raptor R can do in a vacuum or versus the EcoBoost-powered Raptor. All it would say is that the R is significantly quicker than the base Raptor, which, duh. 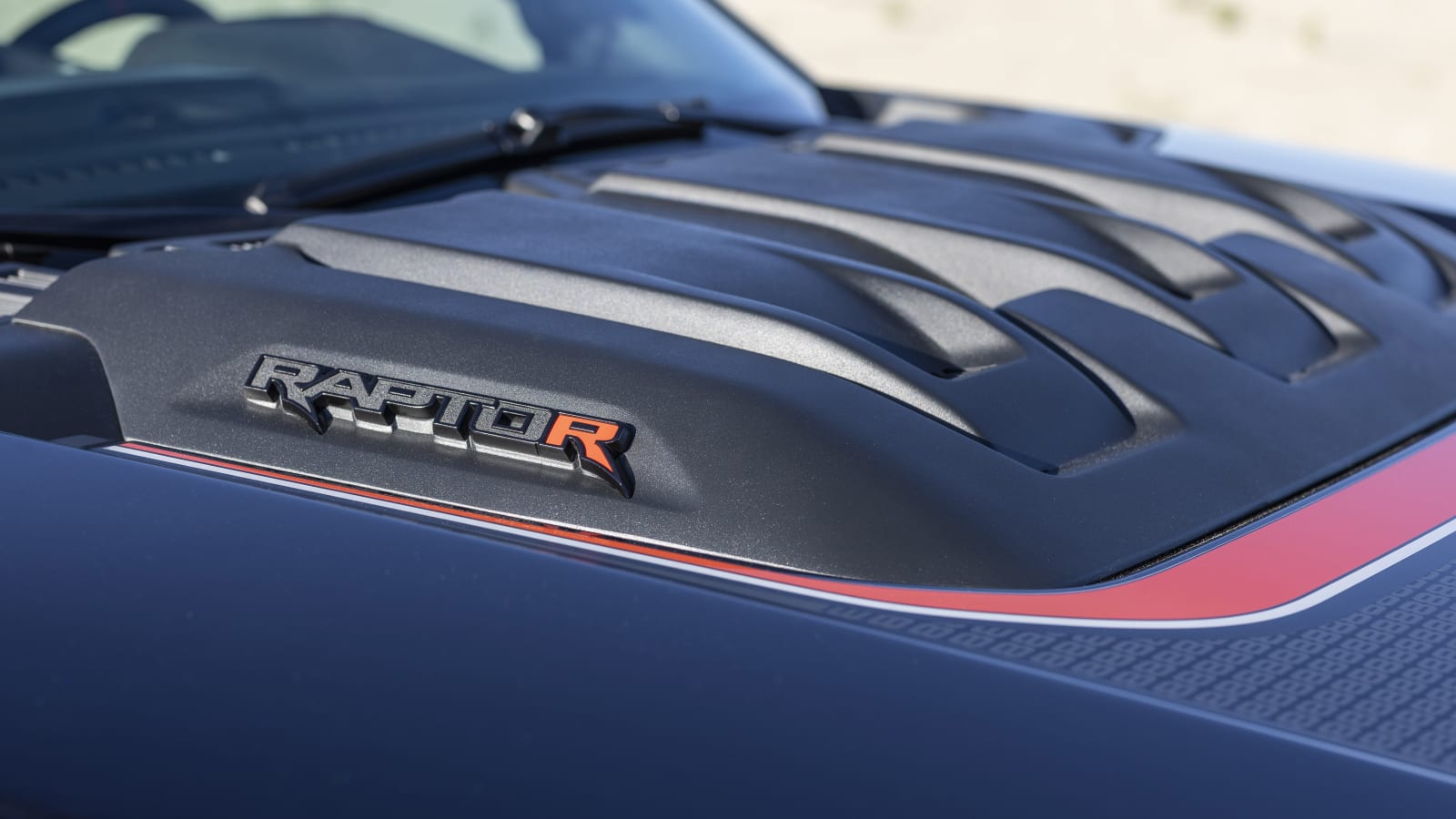 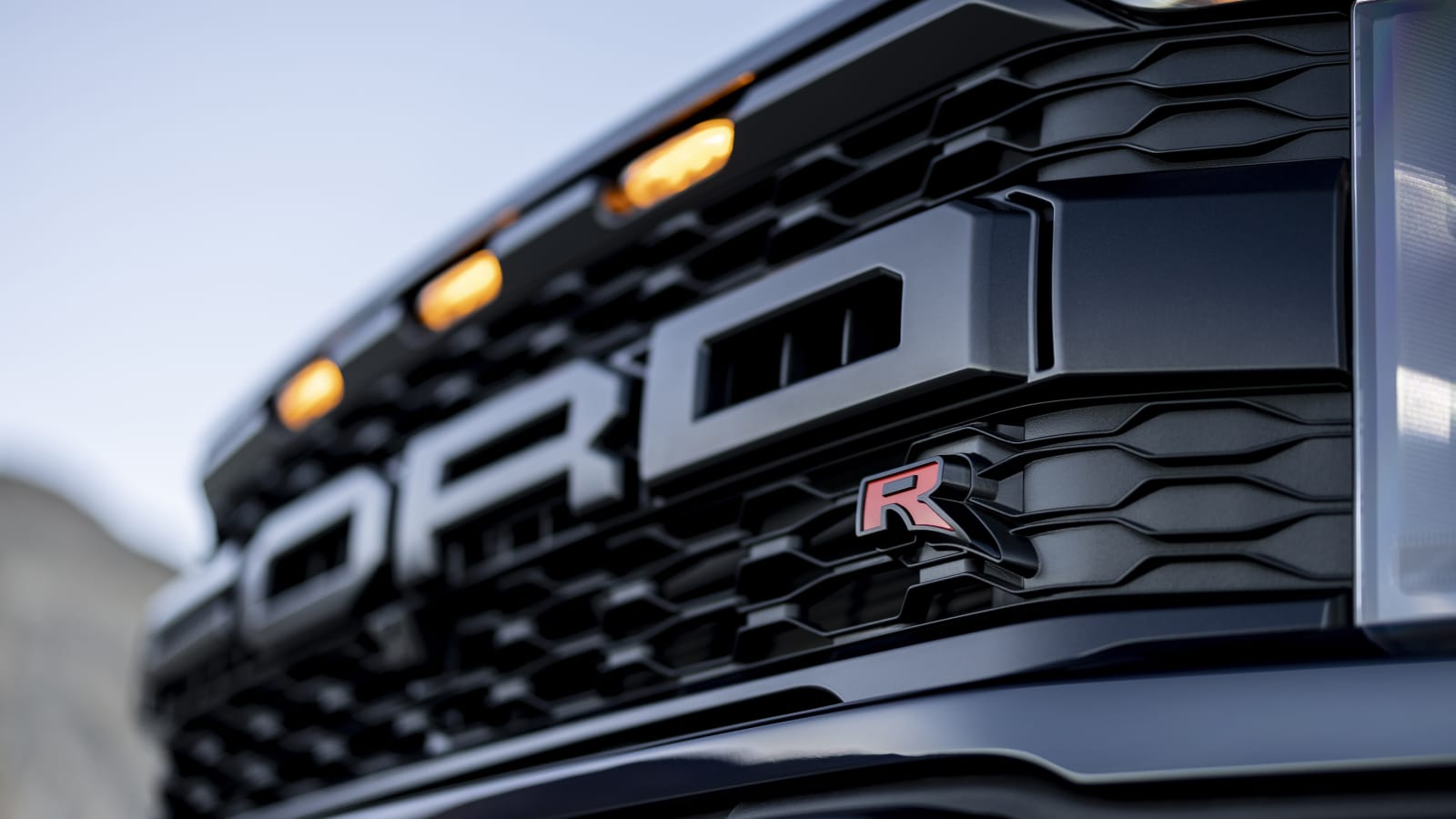 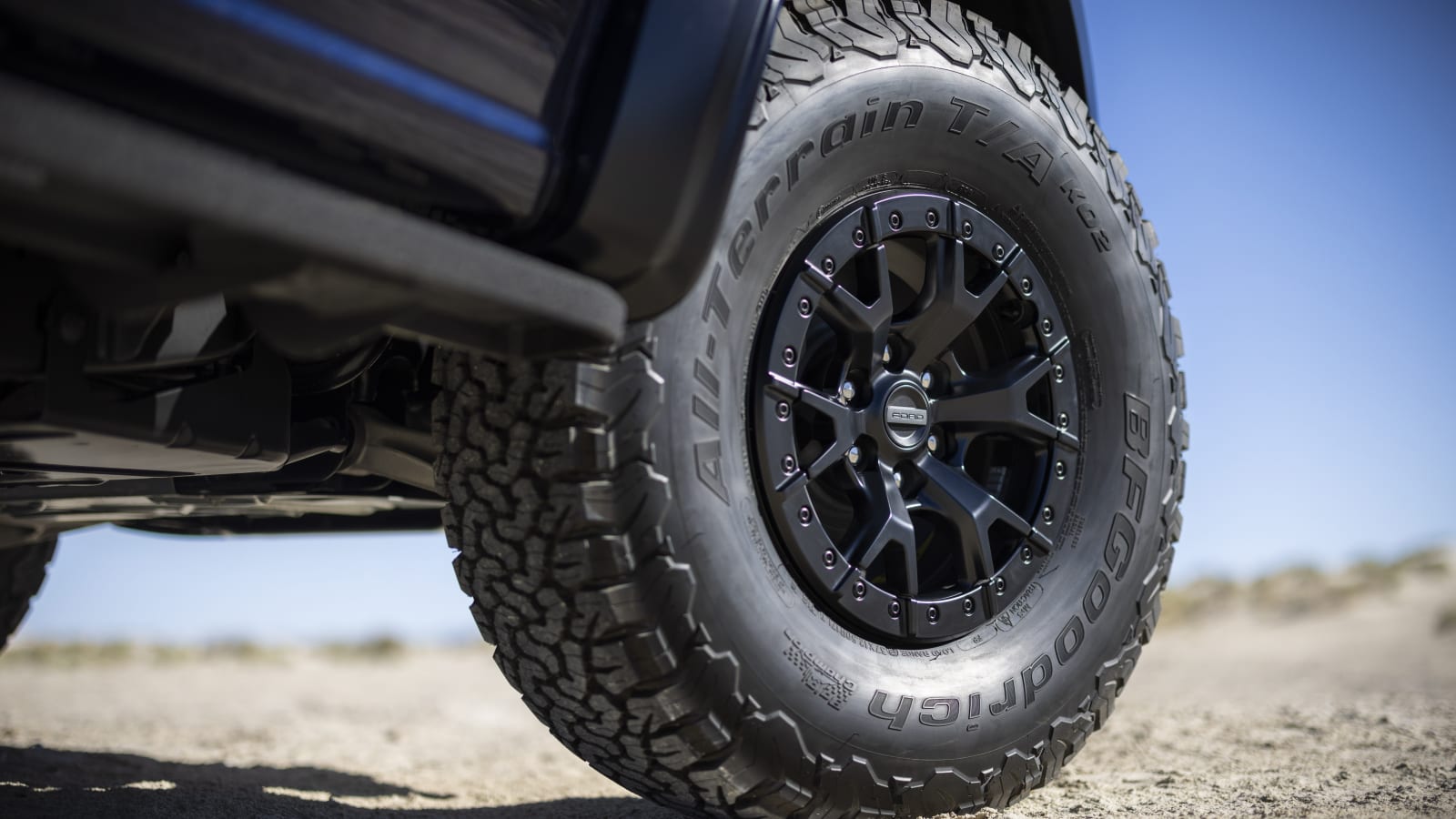 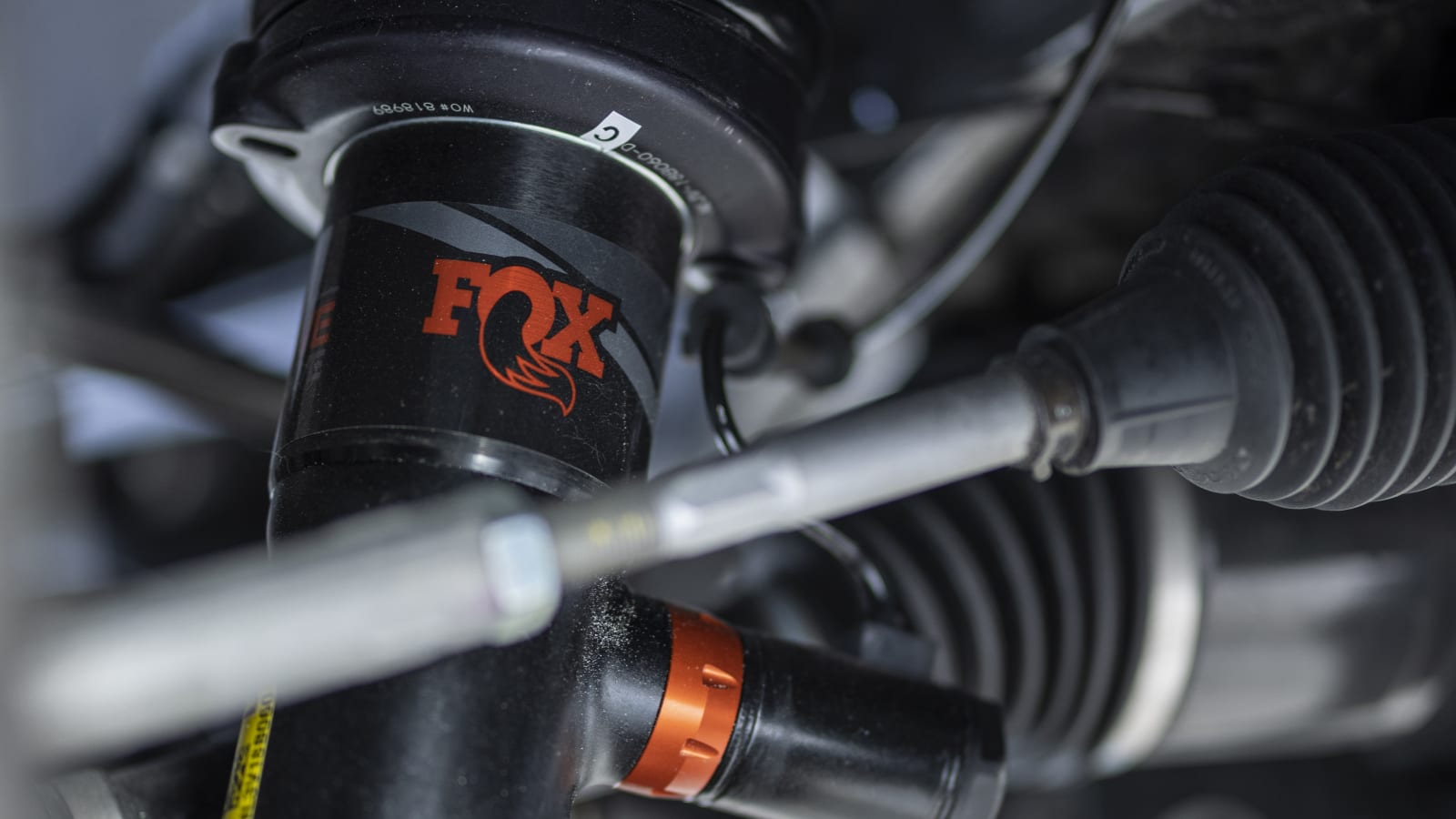 Moving beyond the engine, the Raptor R enjoys plenty of other changes under its skin. The 10-speed automatic from the F-150 is retained for duty here, not the 7-speed dual-clutch auto from the Mustang. However, the 10-speed auto is modified to add performance. Ford says that it’s added a heavy-duty turbine damper and four-pinion rear output assembly to the specially-tuned torque converter. This is meant to provide a smoother powertrain feel both on- and off-road. The transmission’s calibration is changed, too, and Ford promises super-quick shifts up and down the gearbox.

To handle the additional power, Ford installed a new front axle with a higher-strength carrier casting and an aluminum-ribbed structural cover. A new larger-diameter aluminum driveshaft is being put to use, too. As for the suspension and chassis, Ford is using all of the same hardware as the EcoBoost V6-powered Raptor. The Fox Live Valve shocks and coil springs have been re-tuned to better suit a truck with this amount of power and to account for the 80-100 pounds of extra weight the R adds over the standard Raptor. Curb weight is 5,950 pounds for the Raptor R — that’s about 400 pounds less than a TRX.

The massive 37-inch tires are optional on the V6 Raptor, but they’re standard equipment on the Raptor R. This means you have the same 13 inches of wheel travel in front and 14.1 inches of wheel travel in the rear. Ford promises that all of your vital off-roading specs — approach, departure and breakover angles — are identical to the V6 Raptor. Dimensionally, the Raptor R is no bigger than a standard Raptor either. Ford decided it didn’t need to be any bigger than it already was with 37-inch tires, so every spec (height, width, length etc.) is the same. The idea was to keep it similar to the standard Raptor, not massively show it up. 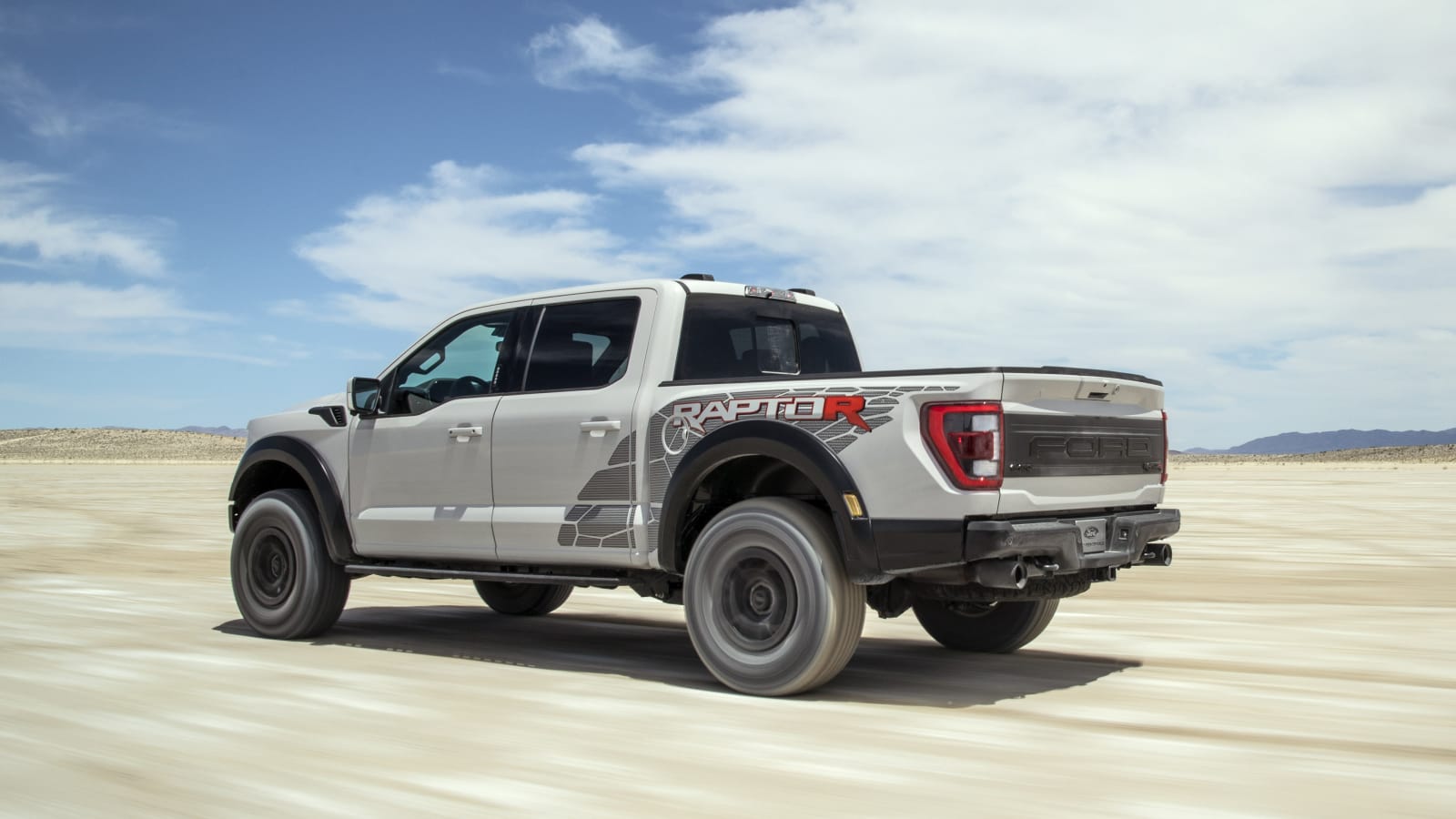 The above said, there are a number of appearance changes you’ll notice with the R right away. A Code Orange R logo sits in the grille, and Ford paints a number of items black that weren’t blacked-out before, like the grille, bumpers and fender flares. The hood features a bulge that is one inch taller than the V6 Raptor, and it also has a graphic that reads “Supercharged V8.” Ford’s graphic pattern, if you look closely, is just a series of 8s. That same graphic pattern continues on the bed-side, and the broken-up pieces are meant to resemble cracked desert earth, where the Raptor R will be most at home. You’ll have eight colors to choose from on the outside, but Avalanche Gray (pictured just above) and Azure Gray Tri-Coat will be Raptor R exclusives. Also pictured in the reveal photos here is Antimatter Blue.

As for interior changes, they’re minimal. Ford is offering the Raptor R in a single all-black interior spec. Recaro seats come standard, and you get a unique tri-axial carbon fiber weave as the only trim option. Code Orange accents are sprinkled about with orange stitching, trim and the model designation embroidered on the seats and armrest. 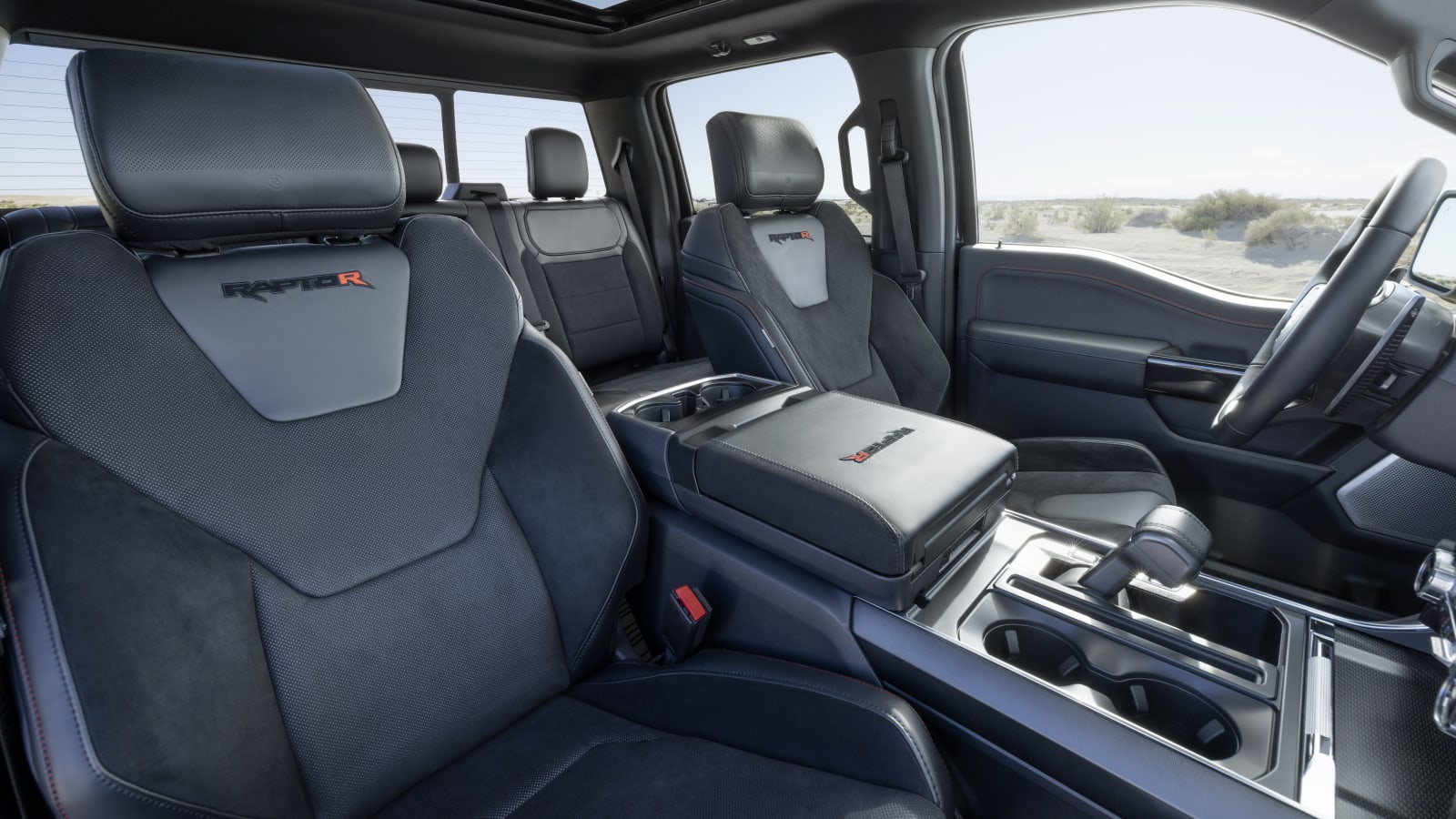 The Raptor R comes with every possible option you can spec on the regular Raptor as standard equipment, except for the moonroof. You can add or delete said moonroof, and there’s also an option to delete the graphics package. All the tech you know about from the regular Raptor is onboard here, including the trick off-road stuff like Trail Turn Assist, Trail 1-Pedal Drive and Ford Trail Control. The base price is $109,145, including the destination charge — ordering begins now, and production starts this fall, Ford tells us.

A fully-loaded EcoBoost-powered Raptor tallies about $86,000 these days, so you’re looking at an approximately $23,000 premium for the supercharged V8. Check every single option box on a Ram 1500 TRX, and it doesn’t come out much cheaper than the Raptor R — our final tally neared $105,000. Let the supertruck wars begin.