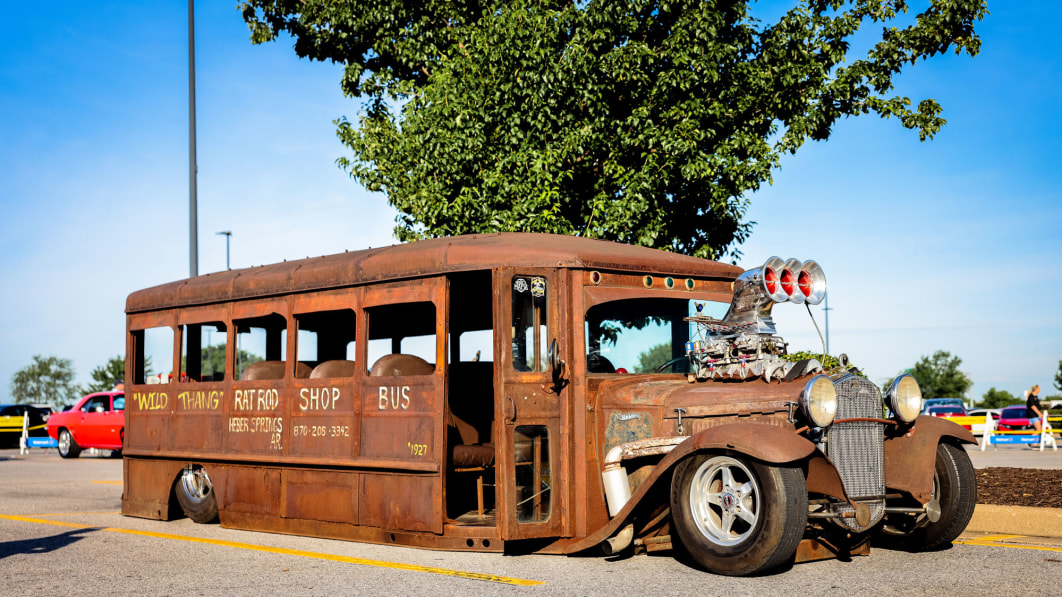 Hot Wheels has selected one of the coolest and most unusual rat rods we’ve ever seen as a Legends Tour finalist. Entered in the Arkansas event, this 1927 Wayne Ford school bus stands out with inimitable patina and a custom-built V8 supercharged to over 500 horsepower.

Marcus and Jackie Andrews of Tumbling Shoals, Arkansas, built this rat rod and left almost no part unmodified. Slammed to within an inch of the ground thanks to an air suspension system, the bus features a weather-worn body, no side windows, and five-spoke wheels. It’s still configured as a school bus inside: there are several rows of bench seats and luggage racks made with yard sticks, among other equipment.

However, the Andrews couple added something that would have certainly spiced up a mundane school run in the late 1920s: a V8 engine tuned to develop more than 500 horsepower using a supercharger and a nitrous-injection system. It spins the rear wheels via a manual transmission operated through a long lever with an apple-shaped shift knob, and cuts made into the hood make the V8 look like it’s about to break free from the engine bay. Hot Wheels points out that the school bus is street-legal, so it’s not merely a head-turning garage queen.

Like previous winners (shown in the gallery above), this 1927 Wayne Ford school bus will move on to the Legends Tour’s semi-final round that’s scheduled for November 1, 2022, and it will compete for the chance to get added to the Hot Wheels diecast catalog. It will square off against past winners, including an Autozam-based monster truck called Texas Toot and Australia’s Frankenmini, which is a classic Mini wagon dropped on a shortened Nissan Patrol frame. Until then, the Legends Tour will make seven additional stops across the nation.